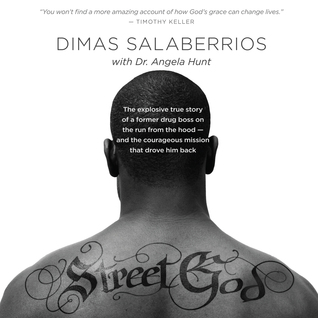 His street name was Daylight. But he was a nightmare.

On the streets of New York, darkness and violence reigned. Dimas “Daylight” Salaberrios began selling drugs when he was eleven years old, and by sixteen, he had served his first stint at the notorious Rikers Island prison. Dimas saw only one way to survive: by reigning over the streets. He would be the richest, most powerful ruler in the hood . . . or die trying.
Street God is the true story of one man’s dangerous journey through the underworld of crime, drugs, and almost certain death. It was an encounter with the real God that saved his life — and then made it even more dangerous. Because that God sent Dimas back down the darkest streets he’d ever known — with other lives depending on it. And Dimas had to ask the question: How far am I prepared to go?
A dramatic, compelling memoir full of twists and turns, Street God delves deep into a world from which few ever emerge — and shows how a single spark of light can illuminate even the darkest existence.

My thoughts: Real life is often even crazier then fiction, and I would say that is certainly true with the story of Dimas. His life story is one that is incredibly encouraging for those who think they have fallen to far for God's grace to reach them, for the parents who despair that their children have chosen a different path and seem to have total turned their back on God. Dimas is real as he talks about how easy it is to get sucked into the drug world, something I didn't realize and that is helpful to know as a parent.
This is an incredible story for teens and adults to read. I highly recommend it!
I received this book from Tyndale in exchange for my honest review.
Posted by Inklings and Notions at 3:20 PM