Stars in the Night

Hollywood 1942. When attorney Audra Schaeffer’s sister disappears, Audra flies to Hollywood to find her but instead must identify her body. Determined to bring the killer to justice, Audra takes a job with the second Hollywood Victory Caravan. Together with Robert Garfield and other stars, she crisscrosses the southern United States in a campaign to sell war bonds. When two other women are found dead on the train, Audra knows the deaths are tied to that of her sister. Could the killer be the man with whom she’s falling in love?

My thoughts: This was an interesting mystery about history and a young woman going to Hollywood with the dream to make it big. My heart broke for Rosemary, as she found that her dreams were harder to make a reality than she realized and succumbed to the dark side of Hollywood. It was interesting how the Hollywood Victory Caravan was woven into the story, something I didn't know much about.

This book was an interesting mystery as Audra struggles to figure out who she can trust as she gets to the bottom of the mystery surrounding her sister's death.

Since the time I could read Nancy Drew, I have wanted to write mysteries. In 2005 I attended a book signing at my local Christian bookstore. The rest, as they say, is history. There I met Colleen Coble. With prompting from my husband, I shared my dream with Colleen. Since those infamous words, I’ve been writing award-winning books with the count currently at 35 published and more in the works.

In addition to writing, I am a mom of four, attorney, clinical professor at a Big Ten university, active in women’s ministry, and all around crazy woman. Crazy about God, my husband, and my kids. I graduated with honors from the University of Nebraska-Lincoln (Go Huskers!), George Mason Law School, and Purdue University’s MBA program. You can learn more about my books at http://www.caraputman.com. And if you’d like a copy of my legal suspense novella, Dying for Love, simply connect with me here (http://www.caraputman.com/contact/), and I’ll send you the link.

3) The first train entertained the President and Mrs. Roosevelt at the White House. What a great way to launch the tour. And Mrs. Roosevelt had a staff member standing immediately behind her to help her “remember” everyone who came by so she could say something personal to them.

4) The Winecoff Hotel, where I have my stars stay while they’re in Atlanta, was the site of the worst hotel fire in American history and has recently been restored and renovated.

5) I initially considered having the tour appear at Ford’s Theater, but it was essentially abandoned during the World War Two era – and was used as storage. Hard to believe if you tour that beautifully restored theater today.

6) The National Theater has had continuous shows running since December 1835. Fortunately for my story, it had a hole the summer of 1942, which fit perfectly with when I wanted my caravan to have a show there.

7) The Hollywood Canteen didn’t open until later in 1942. Since my first book involved a canteen, I really wanted to include the Hollywood Canteen. Besides, what’s more romantic than movie stars mixing with and entertaining servicemen? Unfortunately, it was in the planning stages during Stars in the Night. Maybe in the next book…

As you can see, I love the details of history. I hope Stars in the Night sweeps you away to a time that was rich in service, glamour, and conflict. 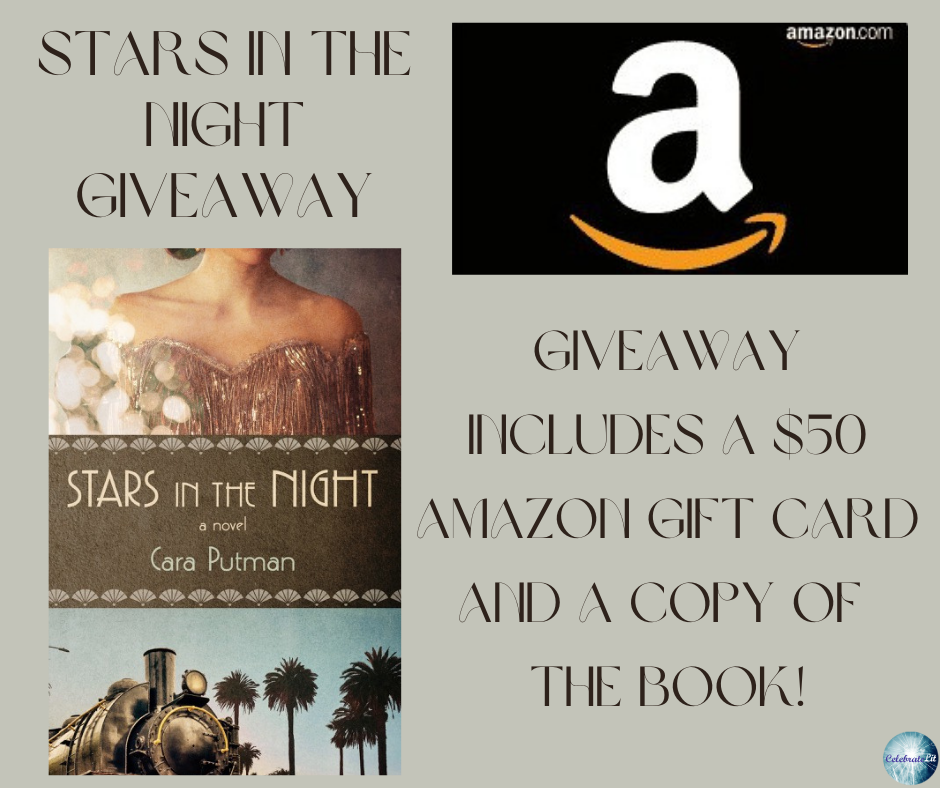 To celebrate her tour, Cara is giving away the grand prize package of a $50 Amazon gift card and a copy of Stars in the Night!!