Season of My Enemy

Only last year, Fannie O’Brien was considered a beauty with a brain, and her future shone bright, despite the war pounding Europe. With her father’s sudden death and her brothers overseas, Fannie must now do the work of three men on their 200-acre farm—until eight German prisoners arrive and, just as Fannie feared, trouble comes too. Someone seems intent on causing “accidents,” and Fannie is certain the culprit is one of the two handsome older Germans—or possibly both. Can she manage the farm, keep the prisoners in line, and hold her family together through these turbulent times?

My thoughts: I thought that this book did a good job of showing a little different side of WWII, with it being about a woman who is brought home to keep the family farm running. When her family realizes that they can't keep the farm going at full capacity without some of her brothers there, they decide to employ some German prisoners of war. I can only imagine what a big decision that would have been, as well as feeling judgement (real or imagined) for doing so. The author handled the difficult subjects well, and it was interesting to see some friendships blossom when those on both sides of the war chose to see the other as human beings, a lesson that is timeless and important today.
This is a wonderful, historical read to pick up and enjoy!
I received this book from Celebrate Lit. This is my honest review.

Naomi Musch is an award-winning author who writes from a deer farm in the pristine north woods of Wisconsin, where she and husband Jeff live as epically as God allows near the families of their five adult children. When not in the physical act of writing or spending time loving on her passel of grandchildren, she can be found plotting stories as she roams around the farm, snacks out of the garden, and relaxes in her vintage camper. Naomi is a member of the American Christian Fiction Writers, the Wisconsin Writers’ Association, and the Lake Superior Writers. She loves engaging with others and can be found all around social media or at her site naomimusch.com

Welcome to my wilderness – that’s what it says when you pop onto my website, because so many of my books take place in rural and wilderness settings. That’s where my heart lives too. Therefore, when I decided to write a World War II story, I gravitated to the home front, to rural America, where living out the war years meant a different kind of survival.

Before this story idea came to me, I knew that prisoners of war had been held in America during part of the war years. There are a number of other wonderful WWII novels out there set in North America involving POWs, and I adore the 2005 movie Sweet Land. Yet, until looking further, I hadn’t realized that so many German soldiers were held right here in my home state of Wisconsin! In fact, thousands of prisoners were sent to work in our country’s canning factories and on our farms. How could I have grown up and never been told that there had once been a POW camp right in my home town?

In fact, there were 38 such “branch camps” just in Wisconsin alone—camps that housed workers specifically for contracting work on farms and in canneries. Workers were contracted by farmers with the army and sent to labor in the cranberry bogs, cherry orchards, apple orchards; to farms picking beans, peas, corn, and to tend the other crops. By international treaty, prisoners had to be paid for their work, so they were allowed to earn scrip in the equivalent of 80 cents per day which they could spend in camp canteens on personal items.

Bingo! There was the seed that burst through the soil of my imagination for my novel Season of My Enemy.

My heroine Fanny O’Brien is a Wisconsin farm girl who left state teacher’s college to manage her family’s farm during the war. She never imagined herself coordinating the work of eight German prisoners in the process—or what the outcome of that task would be.

I believe a great story has to reveal strong yet subtle themes in order for the characters and their plight to feel real. In Season of My Enemy, Fannie uncovers a lot of prejudice both in her own heart and as her eyes are opened to the broader sphere around her. There are all kinds of prejudice in the world, and some of it revealed in this story may surprise you. In fact, my editor and several other authors of WWII fiction who read the book all said, “I didn’t know that!” (I won’t tell you what they were referring to, because you know…spoilers.)

Season of My Enemy isn’t all about history of course. It’s a heartfelt story of a man and woman who slowly yield their hearts to love amidst unpredictable times and unusual circumstances. They begin as enemies who finally look beyond their prejudices to find they have more in common than they first thought. To overcome terrific odds, they must depend upon their faith and rest in a powerful hope that touches their own lives as well as the lives of others surrounding them.

I hope you’ll read Season of My Enemy, and be sure and pop me a note to tell me what you think! 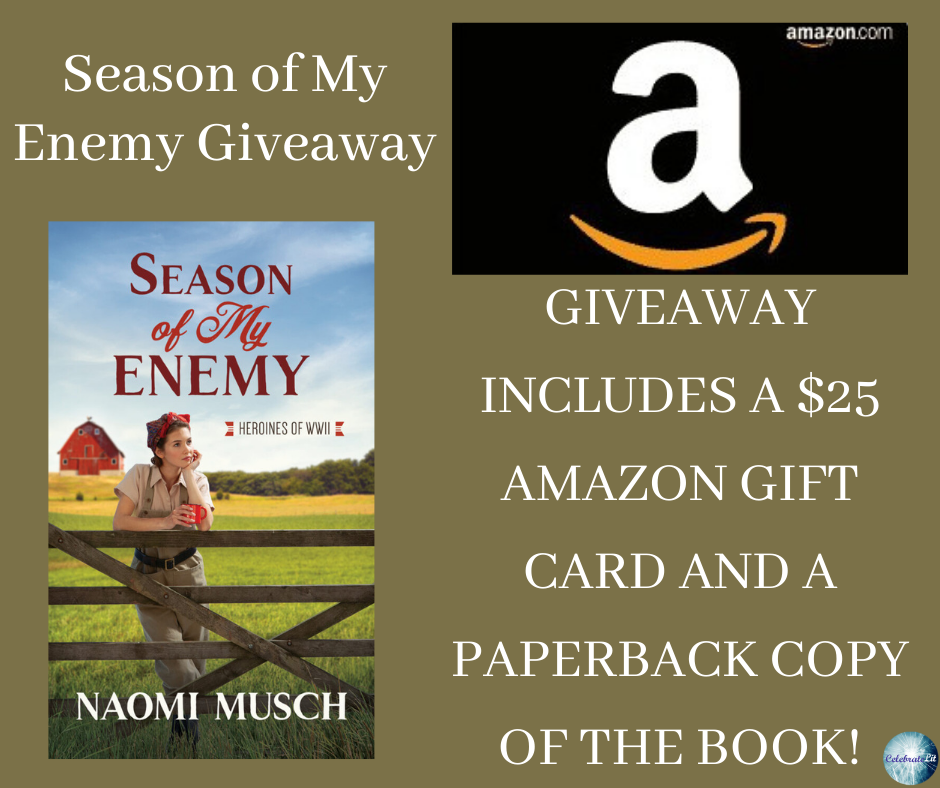 To celebrate her tour, Naomi is giving away the grand prize package of a $25 Amazon gift card and a paperback copy of the book!!

Posted by Inklings and Notions at 7:33 PM