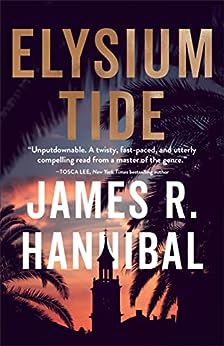 Dr. Peter Chesterfield is one of the Royal London Hospital's top neurosurgeons. He is also a workaholic, ordered by his boss to take a week off to attend a medical symposium at the luxurious Elysium Grand on the island of Maui. While there, Peter pulls a woman with a skull fracture from the water. Though he is able to revive her in the ambulance, she eventually dies in his arms, leaving him with only one clue to what happened to her: the word "honu."Increasingly obsessed with discovering the cause of his patient's death, Peter becomes entangled in an ongoing investigation of a brazen luxury auto theft. He also becomes a source of deep irritation to detective Lisa Kealoha, who has jurisdiction over the case.But when the two join forces, they begin to uncover a destructive plot that runs far deeper than either of them could have imagined. And if they're not careful, they're both going to end up dead.Award-winning author James R. Hannibal whisks you away to the deadly beauty of Hawaii for a story of greed, violence, and justice that will leave you breathless.

My thoughts: I enjoyed this story of a House like doctor who gets put sent on a mandatory vacation when he crosses a line while performing surgery. Going to Hawaii for an all expense paid work trip would be a dream for most of us, but it winds up being uncomfortable for Peter as it exposes some things that he would have rather ignored. When a young woman dies in his arms, he gets pulls into the investigation (though, perhaps inserts himself would be a better way to describe what goes down!) that will question all he thought about life and his role as a doctor.
While I think I prefer the fast pace of James R. Hannibal's spy novels, I enjoyed this mystery that throws several curve balls. While Lisa is a likeable character, Peter is a bit of a self centered curmudgeon. I loved his personal journey though.

This is a wonderful mystery to pick up and enjoy, full of surprises!

Posted by Inklings and Notions at 8:29 PM