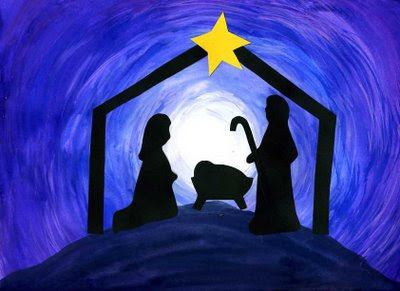 Thanksgiving has always been my favorite holiday, since it was the one where we would either pack up and head to Kansas to be with extended family or have the whole clan over to our house. It's kind of funny that it was a bigger deal than Christmas when it came to seeing family. I suppose that is because most like to stay at home on Christmas day.:D I'm glad my in laws celebrate Christmas with all the relatives, since that is just how I like my holidays. But, I digress.:D
Other than getting together with family, I love the opportunity to reflect on those blessings that the Lord has given me. I'm a bit of a worrier by nature, so sometimes I forget all that I have been blessed with. It's a good practice to count one's blessings, not only around Thanksgiving, but throughout the year.
This year I am especially thankful for my wonderful family, both the one I was born into and my in-laws. I'm thankful for a loving husband who is there by my side. I'm thankful that we both have decent jobs, even if we do work hard.;) I have also been thinking how thankful I am for a roof over our head. A year ago today we closed on our house and, as of last month, it is all ours! When we bought the place, it hadn't been lived in for at least 9 months, so we didn't know what we were getting into. Thanks to the help of family and friends, we have been able to replace the plumbing, re-do parts of the electrical (we haven't touched the upstairs yet, since we aren't living up there), put in a new water heater, hang sheet rock in two rooms, mud walls, paint, and replace the bathroom vanity. In some respects, the inside looks like a different place! We still have our work cut out for us this coming year though.;)
Happy Thanksgiving to all my online friends! Take this opportunity to reflect on those blessings in your life.
Posted by Inklings and Notions at 1:23 PM 2 comments:

I am reading: My Foolish Heart by Susan May Warren, even though I really should be doing Algebra homework.

What I am listening too:Dancing in the Minefields by Andrew Peterson. This is currently one of my very favorites, since it is sweet and so true!

What I am thinking about: How I need to go on another camping trip.

What I need to do:Go make some lunch. I'm thinking today is the perfect day for corn chowder, Grandmommy style.:)
Posted by Inklings and Notions at 10:03 AM No comments:


So, for the World Religion class I am taking, I had to go to this site


http://www.blogger.com/img/blank.gif
and take the test to see what it said about my beliefs. At the end of the course, the teacher is going to have us take it again to see if going through this class will help us to better define what we belief. That would probably help, since there were some of the questions that I was like "I have no idea!". lol.
What were my results?

I thought that was rather interesting.;) I would love to see what your results are!
Posted by Inklings and Notions at 12:12 PM 2 comments:

In a saucepan, heat water and salt to a boil. Stir in bulgur. Reduce heat to low and cover until water is absorbed, which should take about ten minutes.
Meanwhile, in a medium bowl, mash the beans with a fork or potato masher, stirring in the sour cream until almost smooth. Add the seasoning. With floured hands, shape into burgers. Cook in a skillet until heated through. Serve with salsa and sour cream.

I have always enjoyed veggie burgers, so I am happy to have found a recipe for making my own that has such a good texture! I plan on experimenting a bit with the recipe to add more veggies to it.:D
Posted by Inklings and Notions at 7:28 PM No comments: 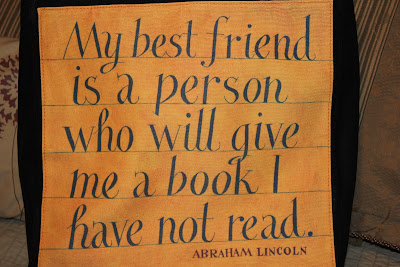 It's national library week.:)
Posted by Inklings and Notions at 8:45 AM No comments:

I'm in the process of moving all of my books out of my parents house and into my own. How did I accumulate so many over the years? My parents used to tease me that my books were my dowry.;) Guess I should of warned Andrew of that. lol.
We have one bookcase up right now. Once the living and dining rooms are (relatively) dust free, I hope to help (watch?:D) Andrew make a few to go in there.
All the possibilities!:D
Posted by Inklings and Notions at 11:47 AM 2 comments:

Posted by Inklings and Notions at 11:33 AM 2 comments:

Might not be the stuff I would choose, but this is the stuff You use. Francesca Battostelli

This winter has made me seriously reconsider my choice in a vehicle. I used to love it, but somehow, with all the Winter storms, I have lost my appreciation for my car. Why, you ask? It is rear wheel drive.
Just last week I was driving to my parents house, on the way home from work, when I wound up in the ditch. My youngest brother was in the car with me and lamented that "Every Winter I wind up in the ditch with you!". lol. (It's not quite that bad!) His comment made me realize that he was reflecting my own thoughts. Instead of realizing how blessed we were that no one was behind us when we spun all over the road, we were focusing on the inconvenience. There have been several instances like this one over the last couple weeks. Like, the time we had to cut into the newly painted wall to replace the shower fixture. It was sad to have to take a step backward. Yet, we found that some of the plumbing had been cross threaded. It was better to find that out now, rather than waiting till it caused problems!
Its made me think of the things that happen every day that I count as an inconvenience, rather than to see if for the blessing it is.
Posted by Inklings and Notions at 10:59 AM 2 comments: