Sister Eve and the Blue Nun 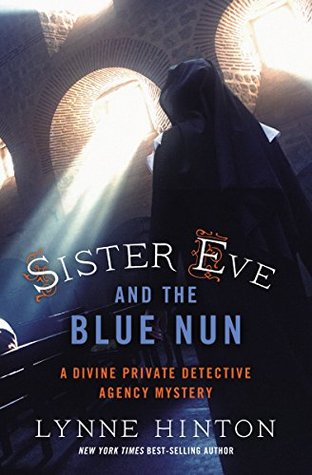 When Sister Eve returns to the monastery, the last thing she expects there is murder.

After solving several mysteries with her father at the Divine Private Detective Agency, Sister Eve finds herself torn between her calling as a nun and the thrill that comes with detecting. She knows she’s been using her father’s health as an excuse to extend her leave of absence from the monastery, but that excuse is running thin. She prays that a return visit to the monastery for a conference on the Blue Nun will help bring clarity to her calling, but when the conference speaker is murdered, Sister Eve’s two worlds collide.

Sister Eve knows the number one suspect, the victim’s brother and monk in residence, couldn’t possibly have committed the crime, and she’s determined to find the real killer. To do so means she must track down some mysterious newly discovered writings from the Blue Nun, said to date from the 17th Century, when the sister bi-located to the New Mexico region from her home in Spain. Could these texts from long ago be the key to today’s mystery? And will they offer any guidance to Sister Eve as she chooses which calling to follow?

My thoughts: This is the first book I have read in the Sister Eve series, and I must say, I was impressed with the unique story! I love the idea of a non conventional nun solving mysteries that fall into her lap, even though Sister Eve is contemplating leaving the life of a nun behind now that things have changed. This one was interesting and has a lot going on, I love the historical background of the Blue Nun.
I may have to go back and read the first two books in the series now!;)
I received this book from Litfuse in exchange for my honest review.
Posted by Inklings and Notions at 8:20 AM