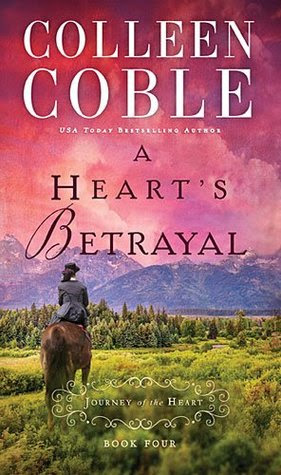 Emmie finds shelter in the arms of a soldier, but her secret could drive them apart.

When Emmie Croftner answered the door to her late husband's home, she discovered a terrible truth. A woman she's never met reveals that she and Emmie shared the same husband and that the bigamist had never divorced his first wife. The home and farm are not Emmie's property after all.

Suddenly displaced and powerless, Emmie realizes she can't stay in Wabash, Indiana, any longer. She makes for Fort Laramie, Wyoming, where her friend Sarah Montgomery and a new beginning await her. But when she arrives, she discovers she's carrying a child, conceived before her husband's death. Was the new start she'd hoped for only a mirage?

At Fort Laramie, a soldier named Isaac Liddle begins to court Emmie, prompting her to wonder whether she could ever really be his--and whether she dares to tell him she is carrying another man's baby

My thoughts: As with the other books in this serial, I found this installment to be an interesting, fictionalized portrayal of what it would of been like to live out in the American West during the late 1800's. I think that Colleen does a wonderful job of showing how fort life was, both the pros and cons of the different parties involved. I like that she introduces some new characters in this one too, and look forward to seeing where the series takes them!
I received this book from Litfuse in exchange for my honest review.
Posted by Inklings and Notions at 7:26 PM