Rise of the Fallen 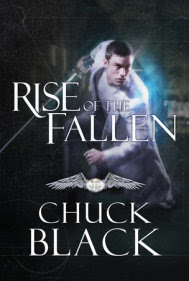 A six thousand year war rages and now the demonic Fallen are coming for him—the one man shrouded in mystery. Only Validus stands in their way.

Validus is the last and least of God’s angels, but he’s seen much across the millennia since his creation. Empires have risen and fallen as angelic and demonic forces battle in a raging war that will determine humanity's fate – and the fate of his defeated brothers.


Eventually called to be an earth-bound warrior, Validus rises to a position of power and respect, commanding legions of angels through impossible battles and overwhelming odds. But when orders arrive from the Creator's most elite Messenger, he finds himself suddenly demoted to a task of apparent insignificance considering the fierce war they are waging against the demonic Fallen – the covert protection of one unbelieving man.


Validus soon finds himself on a mission that will push him beyond his abilities as he battles to protect Drew Carter, for the Fallen are coming for him. Legions of them.

As Validus races against time to discover why Drew is so important to humanity's survival, can he stand between Drew and all who would destroy him?

My thoughts: In some ways, I was kind of surprised by this story, since it didn't pick right up where the first book left off. It starts out telling Validus' story, so readers can catch a few on the history behind this Spiritual battle that wrecks havoc all around us. While I was anxious to get back to Drew's story, it is fun to read more about the authors view on Spiritual warfare. I love that each chapter has scripture verses to back them up, giving the reader a lot to ponder. This book is fiction at it's best, since it gets the reader to think and motivates Christians out of their apathetic stupor. While I don't know that I agree 100% with the authors views, it has encouraged me to do some research of my own. It has also reminded me that we do not wrestle against flesh and bones, but against principalities and rulers of darkness who want to consign humanity to endless torment with them.
I highly recommend this book!
I received "Rise of the Fallen" from Blogging for Books in exchange for my honest review.
Posted by Inklings and Notions at 11:22 AM