When fifteen-year-old Marlee Stanley joins her two sisters and the sons of their family friends on a secretive hike in the middle of the night, she is thrilled and nervous. Battling her conscience, she prays that the hike will go flawlessly and that they will return to the safety of their campsite before their parents wake. The start of the hike is beautiful and wonderfully memorable.

In a white flash so fast that Marlee can barely comprehend what has happened, an avalanche crashes into their path. Buried in packed snow, Marlee is forced to remember survival tips learned from her dad and her own research.

This group of friends, ages eleven through seventeen, is about to endure bigger challenges than many adults have experienced. Digging out of the packed snow is only the first of many challenges. Injuries, cold, hunger, fatigue, aggressive wildlife and tensions in the group make this a much bigger adventure than they ever imagined. As the kids strive to exhibit Christian values throughout the trials, they learn numerous life lessons. But they are nearly out of food, and their energy is waning quickly. How will they ever reach help?

My thoughts: I can only imagine how terrifying it would be to go through an avalanche like the characters in this story did! A seemingly innocent hike to enjoy the sunrise turns scary when they group of young people cross paths with an avalanche. Using survival skills they have read about and honed through previous trips, the 5 young people must learn to work together and lean into their faith to survive.

This is an excellent story! I learned a lot through the information that the characters share on surviving not only an avalanche, but also some other situations one might encounter in the wilderness (particularly the aggressive wildlife!). I look forward to reading more books in this series! 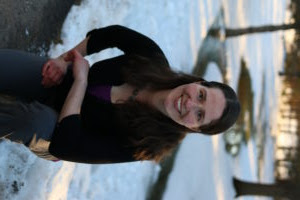 Liz is an author, the wife of a professional tree climber and the mom of three energetic and laundry-producing children. She received her Associate’s of Arts at the University of Sioux Falls, where she received the LAR Writing Award for her essay entitled, “My Real Life Mufasa.” Liz once spent a summer in Colorado teaching rock climbing, which she believes was a fantastic way to make money and memories. She resides with her family in Wisconsin, where they enjoy hiking and rock climbing. Liz and her husband have also backpacked in Colorado and the Grand Canyon, which have provided inspiration for her writing. She likes making adventurous stories to encourage others to find adventures and expand their comfort zones (though admittedly, she still needs lots of practice expanding her own comfort zone). She has thoroughly enjoyed working on her first novel, Avalanche, and the sequel Chased, which will release in the summer of 2020.

Have you ever been tempted to take a risk even though your conscience was screaming at you? Were you able to justify the pursuit of the thrill, actually convincing yourself that what you knew to be the unwise decision made perfect sense?

I did. So did my sisters. And so did Sawyer and Marshall Miles. When Sawyer first proposed the idea of the moonlit summit on our families’ annual backpacking trip, I was terrified. But I was also hooked. Sawyer convinced us that we would be fine, and we would be back to camp before our parents woke up with the sunrise.

Hearts racing and hands trembling, we five kids snuck away from camp in the middle of the night. Hiking toward the peak, the full moon was breathtaking, the wildlife abundant, and the experience unreal.

It became a whole lot more unreal when an avalanche, roaring, white and enormous, thundered into our path. Buried in the packed snow, I would have given anything to go back in time and change my decision to go along with this foolish idea.

Digging out of the cemented snow was the first of many challenges in the coming days. Physically, emotionally and spiritually, we were all pushed to our limits.

I had always loved hiking Colorado’s peaks. But, of course, I had never had to evacuate my own sister. I had always trusted Dad’s orienteering. Now I had to trust Sawyer, who, by the way, was the brain behind this dilemma. I usually slept best while backpacking. But, mountain nights are warmer when spent in a sleeping bag. But I can’t let my mind go there. I must keep a positive outlook and trust God to bring us to safety. That’s easier said than done.

Avalanche is a Christian teen and young adult novel. This engaging journey, told by fifteen-year-old Marlee Stanley, captures a timeless sense of adventure. The five young adults strive to exhibit godly character throughout their escapade, but they have not been in such a dire situation before. It will take immense strength and cooperation to hike out of this mess.

To celebrate her tour, M. Liz is giving away the grand prize of a gift basket with a copy of the book along with some great trail snacks!!