Author of the Amazon bestselling Aggie and Past Forward Series, Chautona Havig lives and writes in California’s Mojave Desert. With dozens of books to her name, Chautona spends most of her time writing, but when she takes the rare break, she can be found reading, sewing, paper crafting, or sleeping and dreaming of finishing the dozens of books swirling in her overly-active imagination at any given moment.

They talked—my favorite Denny’s server and a guy she met. “Shanetta (she can’t get my name right to save her life) writes in booth 14 every night.”

Again, the guy asked, “What genre.”

I’m sure she didn’t know what she was in for when Angela said, “Christian fiction.”

The man’s response? Priceless. “So, what, she makes up lies about Christians?”

As I said in THIS POST, I used to use Christian fiction as a general explanation of what I write but it wasn’t the “simple answer” that I’d expected. So, then I started saying, “Well, this one is…” and I’d fill in the blank. Mystery, romance, suspense, historical, contemporary, youth—you name it, I’ve probably written it. Well, except for erotica. And true sci-fi? Yeah. That probably won’t happen either. Horror? Not my thing.

Once I’ve explained my odd genre choice for this particular book, I tend to point out that most of my fiction follows under the general heading of Christian fiction. Inevitably the question follows, though. “Why Christian?”

It would be easier to answer why not. I could just say, “As a Christian, I find it almost impossible to leave my faith and worldview out of my writing.” It’s true, but I did manage. Once. Even then, if you look deep into the core of that little story, you’ll still find basic Biblical themes and truths. They’re just less overt.

But people never ask why not write something else. They ask why I write Christian fiction. So I tell them. I start with my purpose. “I write stories to point Christians to the Master Storyteller.” I write about Christians for Christians. I don’t write evangelistic fiction, although occasionally someone comes to Jesus in my books. The reason I do this is because I’m writing to encourage the body of Christ. If I wrote to introduce the lost to Jesus, I’d be writing mainstream to whet people’s thirst for the Word and the Lord.

But that’s not my goal. How I achieve my goal is my website’s tagline. “Christian fiction without apology or pretense—lived, not preached.”

In the books featured in this blog tour, you won’t find people, as a general rule, spouting sermons disguised as prayers. I show a faith-filled life lived… or not, as the story requires. I show you why Christians believe things that I may not even agree with. And I hope, that with each word, I create a desire for just one more minute in the Word.

Each of the bloggers involved in the tour were given different books to read and review, the book I was given is None So Blind. 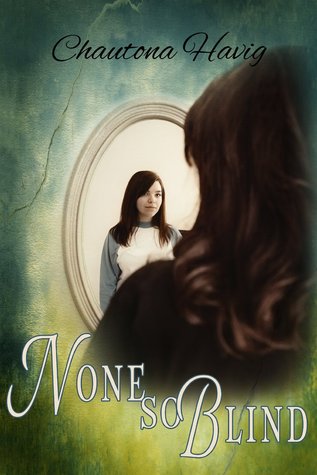 Dani and Ella Weeks–two women who share one thing in common–the same life, the same family, and the same body.

When Dani wakes with no knowledge of who or where she is–no memories of her life at all–David and Dani Weeks discover that “til death do us part” takes on an entirely unexpected meaning. Practically speaking, Dani died. But she didn’t.

In a desperate attempt to separate the old life from the new, Dani insists on a new name–Ella.

Ella’s doctors can’t explain what happened. Her children can’t understand why she doesn’t know them, and her husband finds himself torn between admiration for the “new” version of his wife and missing the woman he’s known for over fifteen years.

Will Ella ever regain her memory? Why does their pastor suspect it’s one great hoax?

My thoughts: Chautona is an excellent writer who brings this unique story to life. I can only imagine what it would be like for a loved one to go through something like this, forgetting who they are and their relationship to you. This is a wonderful story about identity! I look forward to reading the other books in the series.
I received this book from Celebrate Lit in exchange for my honest review.

For a complete list of the blog stops, please go here
Posted by Inklings and Notions at 8:07 PM