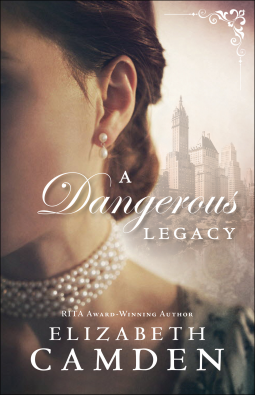 Lucy Drake's mastery of Morse code has made her a valuable asset to the American news agencies as a telegrapher. But the sudden arrival of Sir Colin Beckwith at rival British news agency Reuters puts her hard-earned livelihood at risk. Newly arrived from London, Colin is talented, handsome, and insufferably charming.

Despite their rivalry, Lucy realizes Colin's connections could be just what her family needs to turn the tide of their long legal battle over the fortune they were swindled out of forty years ago. When she negotiates an unlikely alliance with him, neither of them realizes how far the web of treachery they're wading into will take them.

My thoughts: It's been a while since I last picked up one of Elizabeth Camden's novels, since I've been trying to whittle down my to be read stack of books. Finishing this one has made me want to go back and pick up the last couple that I have missed!
At first glance, this story reminds me a bit of Bleak House, since Lucy and her brother have spent their lives embroiled in a family lawsuit. This story has so much more going on to make it it's very own though. I love the historical details and the glimpse of how life was in certain areas in the early 1900's. I also found it interesting to catch a glimpse of some of the reasons behind American heiresses marrying titled English. This book is a delightful read whether you are into history or not, since it is fast pace and has mystery and intrigue. I highly recommend picking up this one!
I received a copy of this book from Bethany House in exchange for my honest review.
Posted by Inklings and Notions at 6:49 PM