A Love So True 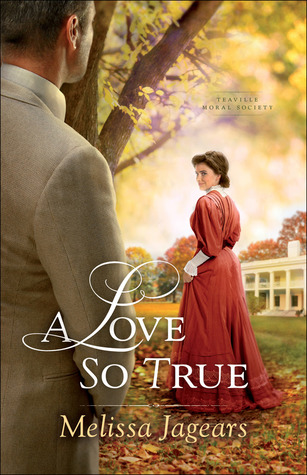 Evelyn Wisely has a heart for the orphans of Teaville and works at a local mansion that rescues children out of the town's red-light district and gives them a place to live. But her desire to help isn't limited to orphans. The owner of the mansion, Nicholas Lowe, is willing to help her try to get the women working in prostitution out of the district as well--if she can gain the cooperation and support of local businessmen to go against the rest of the community.
David Kingsman has recently arrived in Teaville from Kansas City to help with one of his father's companies in town. While he plans on staying only long enough to prove his business merit to his father, he's shown interest in Evelyn's work and is intrigued enough by her to lend his support to her cause.
They begin with the best of intentions, but soon the complications pile up and Evelyn and David's dreams look more unattainable every day. When the revelation of a long-held secret creates a seemingly insurmountable rift between them, can they trust God still has a good plan for them despite all that is stacked against them?

My thoughts: I have loved both books in this series! Both have done a marvelous job of bringing the time period to life, not to mention addressing social issues of the early 1900's. I loved getting to know Evelyn as she fought for to help others find a better life outside of the red light district of Teaville. At first, I wasn't so sure about her and her reaction to David, but things made sense as I read on and discovered more of her story.
This is a wonderful book that can be read as part of the series or as a stand along story. I highly recommend it!
I received this book from Bethany House in exchange for my honest review.
Posted by Inklings and Notions at 5:56 PM