Murder in the City of Liberty review and giveaway! 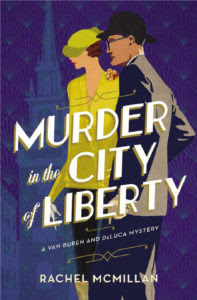 Hamish DeLuca and Regina “Reggie” Van Buren have a new case—and this one brings the war in Europe dangerously close to home.
Determined to make a life for herself, Regina “Reggie” Van Buren bid goodbye to fine china and the man her parents expected her to marry and escaped to Boston. What she never expected to discover was that an unknown talent for sleuthing would develop into a business partnership with the handsome, yet shy, Hamish DeLuca.
Their latest case arrives when Errol Parker, the leading base stealer in the Boston farm leagues, hires Hamish and Reggie to investigate what the Boston police shove off as a series of harmless pranks. Errol believes these are hate crimes linked to the outbreak of war in Europe, and he’s afraid for his life. Hamish and Reggie quickly find themselves in the midst of an escalating series of crimes that seem to link Boston to Hamish’s hometown of Toronto.
When an act of violence hits too close to home, Hamish is driven to a decision that may sever him from Reggie forever . . . even more than her engagement to wealthy architect Vaughan Vanderlaan.

My thoughts: I enjoyed the return of Hamish and Reggie in this second mystery! They are a fun, quirky pair set during the Depression. I enjoy the depth to their characters, as well as their diverse backgrounds. This mystery deals with some issues that wound up being a bit overshadowed by the II World War, with dealing with hate crimes in the period before war broke out. This is an excellent mystery that is well written and will keep you reading into the wee hours of the morning! I highly recommend it.
I received this book from Celebrate Lit. This is my honest review and is in no way influenced by receiving a complimentary copy.

About the Author:
Rachel McMillan is a keen history enthusiast and a lifelong bibliophile. When not writing or reading, she can most often be found drinking tea and watching British miniseries. Rachel lives in bustling Toronto, where she works in educational publishing and pursues her passion for art, literature, music, and theater.

Read the excerpt
Boston
April 19 40
There really never was a good time to drown. But this particular April had been unseasonably cold and promised spring long in coming. The slosh of the Charles River warmed by ribbons of June sun would have been preferable to the crusted sludge of leftover ice rimming the harbor, or so thought Reggie Van Buren as she bobbed up and down like a buoy.
A New Haven Van Buren ought to have perished an old, wealthy woman, tendrils of snow-white
hair falling around a satin pillow, comforted in the knowledge that she would be interred in
the family plot, her soul destined for paradise—not with water up to her nose, choking as it lapped in and out like a tide over her chattering teeth. But a New Haven Van Buren also might have had the propriety to insist upon the use of her given name and not the “Reggie” she so preferred. The Reggie she was just hearing now in a rather frantic yet familiar voice.
“Reggie!” Hamish DeLuca’s panicked voice reached into the hollow dome of her cement cave. “Reggie!”
“I was st-stupid. I s-slipped.”
She treaded poorly, her arms feeling like gelatin, her form rather lacking the swimming skills
she had learned informally alongside her family’s schooner on Regatta Day. Reggie strained to rise above the lapping water. She took turns treading and raising herself as high up on her toes as she could. Rotating and wondering why she failed to complete the ballet classes her parents enrolled her in as a child. Standing on tiptoe might have added inches to her height and allowed her to clear her mouth of the water. As it was, her calf muscles strained. She said something that came out in a series of bubbles before glugging, rising upward, and noticing for the first time how the fog from her icy breath rippled over the water. If she couldn’t understand herself,
how would he?
“S-slipped,” she said again, trying to make him out in shadow. “H-Hamish.” She tried again. Funny, usually he was the one with the stutter. Hamish DeLuca with the stutter and the bit of a handshake and that one pesky dimple and those big blue eyes. Her own eyes fluttered. Maybe she would never see him again. She would just slip under the water and rest her heavy eyelids. She blinked until a stream of torchlight buttered the dark walls, crystallizing the percolating water drips around her, and then the figure of her rescuer, whose blue eyes looked even more brilliant than usual in the eerie glow of the flashlight.
Hamish dropped to his knees. “Take my hand.”
“This didn’t turn out as I expected,” she chattered.
“Reggie, we don’t have much time.” His voice rippled as he looked frantically at her and then over to the grille she had stared at since she got into the mess, watching the water level rise and fall and rise and fall until it made her dizzy. She clung to his hand a moment.
“We should have gone with plan B.”
Hamish growled. “We didn’t even have a plan A.”
“You’re my hero, Hamish.” She patted his hand with her icy one. “It was so nice of you to come.”
“Reggie, just take my hand.”
“I’m stuck!”
“What?”
“M-my shoe.”
Hamish said something she was altogether certain she had imagined in her half-frozen and very soggy state. And then, of course, he recklessly jumped in to get her.

Giveaway!
To celebrate her tour, Rachel is giving away a grand prize of both book in the series!!
Be sure to comment on the blog stops for nine extra entries into the giveaway! Click the link here to enter.
Posted by Inklings and Notions at 7:41 PM