'Handmade Hearts' is an historical romance short story set in New Orleans during World War II and was inspired by a true story.

Toward the end of his life, the author asked her Uncle 'Allen' how he met his wife. He shared about how he met 'Irene' at a church social in their neighborhood in New Orleans in the early 1940s. He had been seriously wounded in Guadalcanal in the South Pacific as a young Marine and was using crutches to get around as best he could.

He had many inner wounds which needed time to heal, too. He had no way of knowing when they first met that Irene had suffered her own wartime tragedy. She bravely sought to keep her grief locked away deep inside because thinking about her loss caused her even more sorrow. She needed to be strong because she was the breadwinner for her small family.

Times were tough, but these two unique individuals made it through each day with inner fortitude, determination, and the sincere hope of something greater just over the horizon.

This inspirational short story follows the growth of Allen and Irene's relationship beginning with their chance meeting and leading forward to a lifetime spent together. 'Handmade Hearts' was created to honor this unique couple's love for and devotion to each other in a relationship which spanned seven decades.

Excerpt from the book:
At Irene's prompting, Allen shared about his older brothers, Edwin and Jack, and their current military assignments at the Pentagon and in Europe.
"My oldest brother, Edwin, was drafted by the U.S. Army right after Pearl Harbor. When the Army tested his aptitude, they learned he is highly intelligent. I guess the Army was surprised a farm boy from Mississippi with only a high school education was so smart. He was always a whiz at math in school. Didn't even need paper and pencil to do equations." Allen smiled to himself. "Now he works in Communications at the Pentagon. Top-secret, high-security clearance, you know the drill."
"His job sounds intriguing." Irene said.
"He can't tell us much about his work, but besides being homesick, he enjoys it. My middle brother, Jack, is in the Army serving under General Patton. We haven't heard much from him because of the restrictions on communications for his unit, but we do know he is serving under Patton somewhere in Europe. We hear bits and pieces about Patton's goings-on from the radio reports, and sometimes in the newspaper. My mother is most worried about Jack now, since I made it home alive and Edwin probably won't ever see combat."
Allen's eyes shone with pride as he discussed his brothers' accomplishments and promotions. He brushed over his service in the Marines, noticeably omitting details of his injury and his current medical condition. Instead he talked about his hobbies—cars and fishing. 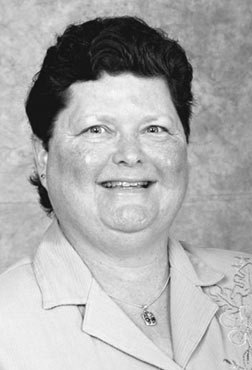 June McCrary Jacobs was the winner of Cedar Fort Publishing's 2013 Holiday Tale Contest for her debut novella, 'A Holiday Miracle in Apple Blossom'. 'Robin's Reward', her first full-length novel, was set in her favorite location in California—the Mendocino coastal region. This book is the first installment of the 'Bonita Creek Trilogy'.

June's debut middle-grade novel, 'RES-Q Tyler Stop', an historical novel set in Sonoma County, California, in 1968, will be released in the spring of 2019. The second installment of the 'Bonita Creek Trilogy', 'Penny's Promise', will be released in late 2019 or early 2020.

June's original sewing, quilting, and stitchery designs have been published in over one hundred books, magazines, and on sewing industry blogs in the past decade. When she's not writing, reading, blogging, or sewing, June enjoys cooking, walking, visiting art and history museums, and touring historic homes and gardens. 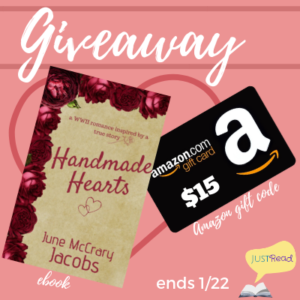 (1) winner will win an ebook copy of Handmade Hearts + $15 Amazon Gift Code
(2) additional winners will each receive an ebook copy of Handmade Hearts
Enter via the Rafflecopter giveaway below. Giveaway will begin at midnight January 15, 2019 and last through 11:59 pm January 22, 2019. Open internationally except where prohibited by law. Winners will be notified within 2 weeks of close of the giveaway and given 48 hours to respond or a new winner will be chosen. Giveaway is subject to the policies found here.

Posted by Inklings and Notions at 3:00 AM