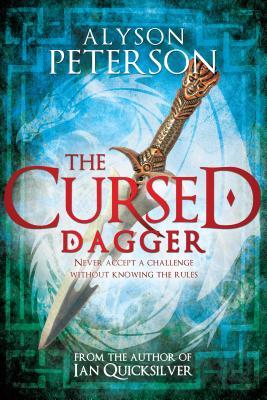 “‘And the Challenge?’ I said.
‘The Challenge will destroy you only you if you lose. Win, and I will walk away from the galaxy forever and leave your family in peace. It’s your choice. Sacrifice yourself for the ones you love, or live and watch them be sacrificed. What will it be?’”

Ian Quicksilver, heir to the Bankhirian throne, has two weeks to get Princess Arianna to fall for him in order to break the curse the magician Silivus has cast over Ian and Ari’s worlds. In the meantime, he still has to go to school, where he is all but invisible, and practice fighting tactics with his guardian, Corbin.

But something is wrong with Ari, and the closer she gets to Ian, the sicker she becomes. After a disastrous dinner that seals Ian as the worst date in the universe, Silivus hits him with a proposal: a winner-take-all challenge that would overrule his quest for Ari’s heart and free them from the curse for good—that is, if Ian can win.

When tragedy strikes Ian’s family and Ari’s illness worsens, Ian must find a way to rise to the challenge, stop a rampaging dragon, and save the day before time runs out for both of them.

My thoughts: This book was a delightful sequel to Ian Quicksilver! I like that there is a lot of humor involved, in addition to it being a science fiction YA novel. The characters are a lot of fun as they navigate being alien, while living on earth as humans for their lives up to the point of the first book. Ian is endearing as he struggles to win the heart of Ari instead of just coming out with it and telling her that they were betrothed at birth and she is stuck with him.;) The ending leaves readers looking forward to the next book!
I received this book from Cedar Fort in exchange for my honest review.
Posted by Inklings and Notions at 3:40 PM