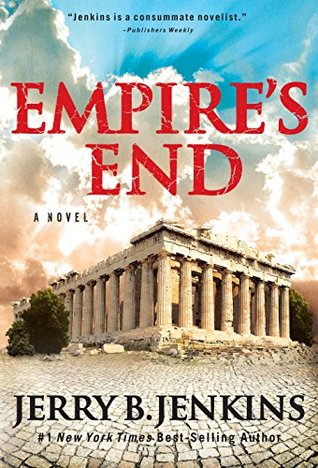 Jerry B. Jenkins’s new novel is filled with adventure, drama, historic people and places, and even romance. Empire’s End tells the story of a man who single- handedly turned the Roman Empire on-end. It will be the heart-stopping story of the year! Only a few snapshots of Paul’s life are revealed in the Bible. In this fictional account, Jenkins tells of a devout Jewish scholar, who after only three years in the Arabian wilderness, emerges as the greatest Christian theologian in history. This novel explains how, after supervising the death of Jesus’s disciples, Paul would be moved to effectively conquer the Roman Empire with a message about a Jewish man named Jesus. You’ll be captured by the shocking “thorn in the flesh” that burdened Paul’s heart. Empire’s End will cause you to rethink whether Paul ever experienced the love of a woman or the embrace of a child.

My thoughts: Jerry B. Jenkins gives us a new look at Saul, who became Paul. In this thought provoking, fictionalized novel, the New Testament days are brought to life! I enjoyed reading about what the times were like that Paul lived in. I found it especially interesting to think of the death of Stephen, since it would of been hard to have grown up with the Ten Commandments saying to have no other God but the Lord, and to suddenly have to figure out how Jesus Christ figures into the equation. This is a wonderful, interesting story that will keep old and new fans alike reading to the last page!
I received this book from Worthy in exchange for my honest review.
Posted by Inklings and Notions at 7:44 PM