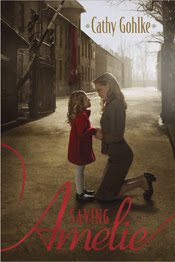 Increasingly wary of her father’s genetic research, Rachel Kramer has determined that this trip with him to Germany—in the summer of 1939—will be her last. But a cryptic letter from her estranged friend, begging Rachel for help, changes everything. Married to SS officer Gerhardt Schlick, Kristine sees the dark tides turning and fears her husband views their daughter, Amelie, deaf since birth, as a blight on his Aryan bloodline.

Once courted by Schlick, Rachel knows he’s as dangerous as the swastikas that hang like ebony spiders from every government building in Berlin. She fears her father’s files may hold answers about Hitler’s plans for others, like Amelie, whom the regime deems “unworthy of life.” She risks searching his classified documents only to uncover shocking secrets about her own history and a family she’s never known.

Now hunted by the SS, Rachel turns to Jason Young—a driven, disarming American journalist and unlikely ally—who connects her to the resistance and to controversial theologian Dietrich Bonhoeffer. Forced into hiding, Rachel’s every ideal is challenged as she and Jason walk a knife’s edge, risking their lives—and asking others to do the same—for those they barely know but come to love.

I have always found books about WW2 interesting, since there was so much going on in a world that was rapidly changing (in most ways, not for the better). In Saving Amelie, a lot of the focus, historically speaking, is on the genetic testing that the Nazis were doing. This book is loaded with historical facts and draws you in from the get go. It was the perfect combination, making you think about your faith and where one would of stood if you lived back then. I liked that there were several different characters with their own stories going on. I am looking forward to reading more by Cathy Gohlke!

Posted by Inklings and Notions at 9:25 AM