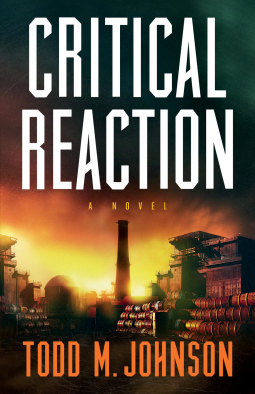 When Kieran Mullaney decides to take on suing the Hanford Nuclear Facility for exposure to radiation at a facility that was supposedly shut down, he doesn't realize that he is fighting a losing battle. Living in a small town that is made up of generations of Hanford workers, he has little chance to succeed. When his lawyer backs out at the last minute, seeing it as a fight she can't win, Kieran contacts his college friend to help him out.
As Emily and her estranged father, Ryan, seek to race the clock and uncover proof for Kieran, they also work through some of their own difficulties.
I loved this book! While Todd Johnson's first book was amazing, I think that Critical Reaction is even better than The Deposit Slip! The suspense is fine tuned, the characters are more realistic, and the story wraps up nicely. Two thumbs up!
Posted by Inklings and Notions at 1:03 PM