Two distinct sets of villains. Two orphaned children. A man without a country and a woman with too much past…All in a rambunctious young country where anything goes, especially in the West. Seriously. What can go wrong?

In this latest installment of the best-selling series, “Western Dreams”, join Jenny and White Bear as they cross the historic West in an epic story peppered with grit, guns, and glory that award-winning author Kelly Goshorn calls “a sweeping tale of faith, dedication, and perseverance set in the American west.”

My thoughts: While I didn't read the previous books in this series, I was still able to enjoy this story and the characters! The author did a great job of catching me up to speed on Jenny and White Bear, as they seek a fresh start in the West. I enjoyed the wide variety of characters and how there was never a dull moment in the story. This is a wonderful book to pick up and enjoy! I know I look forward to going back and reading the previous books in the series!

Kathleen D. Bailey was a child in the 50s, a teen in the 60s, a young adult in the 70s, and a young mom in the 80s. It’s been a turbulent, colorful time to grow up, and I’ve enjoyed every minute of it and written about most of it.

The Oregon Trail was one of the premier events in American history, with people giving up everything to see what waited on the other side of the continent. Some had nothing to give up, and they joined a wagon train simply to survive. That was the case with Caroline Pierce O’Leary, a gently-bred widow whose young husband died before they could make a go of their farm. What would happen, I mused, if Caroline took the skimpy proceeds from selling her farm, signed on as a cook for a wagon master, and worked her way West? And what would happen if the scout on that particular wagon train was the man who had betrayed her years before, and they had to work together to cross the prairie? What if, what if, what if?

Everyone who hopped on a wagon for the Western Migration had a story, and I knew I’d found mine. As Caroline and Michael Moriarty struggled to rebuild their relationship, a host of other characters formed around them like a snowball. The loving Harkness family, who befriended Caroline on the way down from Ohio. Pious matrons who looked down on her and their harried husbands. Jenny Thatcher, the saloon girl who breaks from that life to save Michael’s. And Pace Williams, the wagon master, a man who had seen too much of life before he even took to the trail. The first book in the Western Dreams series, “Westward Hope,” debuted in September 2019.

I fell in love with Jenny and I fell in love with Pace. Jenny followed her new friends to the muddy Oregon hamlet where they settled, and Pace gave up the trail to make a life in the Oregon woods. But I wasn’t done with either of them – they had their own stories to tell. Pace battled his own demons and his love for Michael’s sister Oona, and it was enough to give them their own book, “Settlers Hope,” published in July 2020. I also spun off two novellas, “The Logger’s Christmas Bride” and “The Widow’s Christmas Miracle,” from the bigger books, and these were published with Pelican Book Group’s Christmas Extravaganza.

Jenny Thatcher demanded her own book, and she had a lot to offer. Saloon girl, wagon train scout, hotel cook and maid, horse breeder. Jenny could do anything, and she’d already proved it in the first two books. But Jenny had some unfinished business – the handsome Indian brave who’d saved her life, early in the westward journey. She’d never forgotten him, and White Bear had never forgotten her. What if she left the horse farm, and all she’d achieved in Oregon, to take to the trail again and find him? And what if he had the same idea? What if they crisscrossed the known world, picking up strays and meeting historical figures before coming together in New Orleans? (Honestly, what better place to reconnect with a lost love?) And what if the forces of evil split them up again, so they had to keep searching?

Though Jenny accepted Christ as her Savior sometime in the second book, her past continues to haunt her, and she wonders if she can ever be good enough for God. She’s physically given up the saloon life, but her inner doubts remain. White Bear struggles with a different facet of their union: can he sentence her to the criticism and censure of the white world if they marry?

The epic journey of two larger-than-life people formed the basis for the third Western Dreams book, “Redemption’s Hope,” out July 22, 2022.  Like Caroline and Michael, Pace and Oona, Jenny and White Bear find their answers in the Risen Christ.

Am I done with the West? Not likely. While I’m working on new novels set in other time periods, the West and my personal Western Dreams keep tugging at me. What happened to the Harkness family, Caroline’s friends, when they went to California? What happened to the ragged Smith children Caroline befriended? What happened to Jenny’s traveling companion, the would-be miner Noonday?And how can I give this up when I haven’t written a cattle drive or a barroom brawl?

For Him and My Family, September 6

By The Book, September 7 (Author Interview) 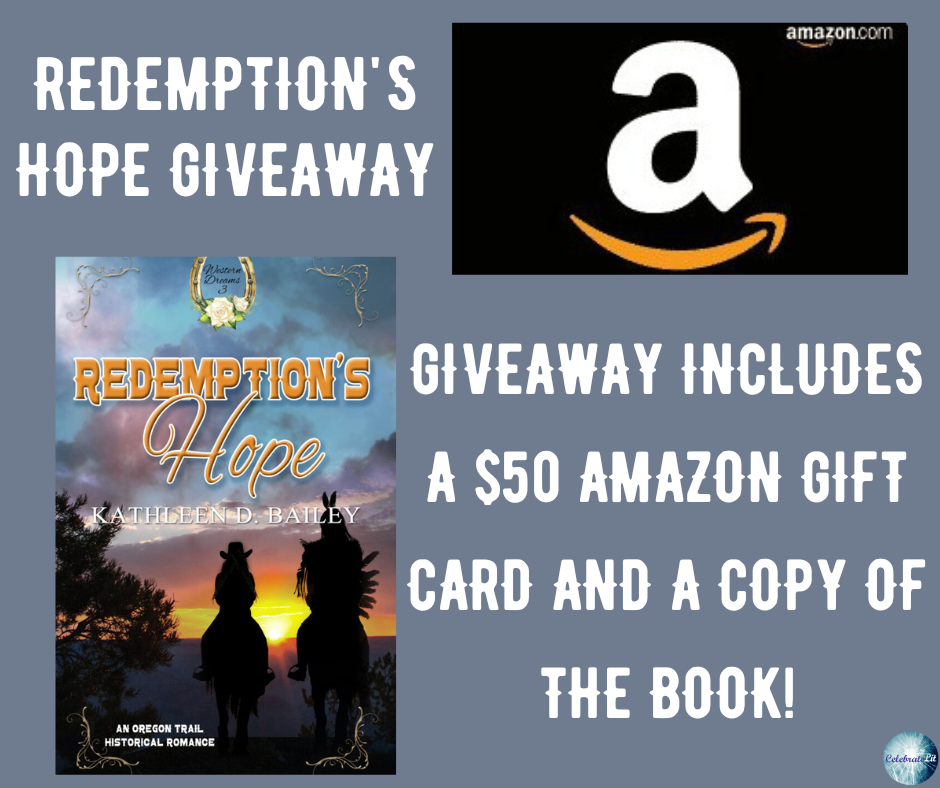 To celebrate her tour, Kathleen is giving away the grand prize package of $50 Amazon card and copy of book!!