Fighting and Flirting with my Cowboy Enemy

Jackson Ashford seems to have it all. Gorgeous looks, fulfilling job, loving relationship with his family . . . and he looks amazing in a cowboy hat. He may be a bit of a grump at times, but that doesn’t deter the women of Blue Falls from vying for his attention. So when Ruby Ellison arrives at his doorstep and hates Jackson on sight, he’s confused, to say the least.

Ruby Ellison never intended to come to the tiny town of Blue Falls, Idaho, but when her best friend’s search for her birth father takes her there, Ruby follows. She comes because she’d never let Madi down, but she stays because she quickly comes to love the small town. It’s the best place she’s ever lived . . . with one exception. Jackson Ashford. But Ruby figures she’ll just avoid him. Blue Falls is a small town but surely it’s big enough for two people to keep their distance.

But when Jackson and Ruby are both asked to coach an eight-year-old girls’ basketball team, Ruby realizes there will be no avoiding the man. She’ll just have to hate him up close rather than from afar. But as Ruby gets to know him she realizes that maybe the man she thought she knew isn’t really who Jackson is at all.

Join Ruby and Jackson as they fight and flirt their way to a happily ever after.

My thoughts: I enjoyed the story of Ruby and Jackson, as the sparks flew when they had to be near each other! Their banter was fun to follow along with, especially as they found out they had more in common than they thought. I love that this story had some delightful side characters, with Ruby's best friend looking for her family and then Sofi and her secret crush. I hope that the epilogue means that Sofi will get her own book soon!
This is an enjoyable, small town story with a fun cast of characters! I look forward to reading more by the author.

Julia Keanini is just a city girl living in a country world (and secretly loving it). She loves the mountains and would adore the beach, if it weren’t for all the sand and salt (wait, that is the beach?). A good book, a great song, or a huge piece of chocolate can lift her mood, but her true happiness is found in her little fam. She writes about girls and women who deal with what life throws at them and always about love, because she LOVES love.

I almost got run over by a cow when I was thirteen. I homeschooled during my middle school years and my parents decided I needed to do more with my free-time. So they sent me to work at a friend’s ranch. I was a typical very self-conscious teen and I had been near horses and cows probably at most five times in my life. You could see that this maybe wasn’t the best combination but my parents were sure and they promised me a juice at the end of every shift so I was game.

I started by brushing horses tails and braiding them. I was the oldest of five girls so this was totally in my wheelhouse. I also shoveled a whole bunch of manure. This wasn’t my favorite part of the job. But I quickly fell in love with horses. They were majestic if not a little stinky, but I loved them all the same.

Then came the big day. The cows needed to be branded and it was my job (who decided this I will never know) to get the cows into the chute where they would be branded. Granted I did this with four other grown men, the people who should have been doing the job, but I was out there as well. In the middle of this arena. Trying to not get killed. I managed for about five cows and then there was a mean one. I knew from the moment I saw her that she wanted me out of there. The moment she was let free she beelined it in my direction, letting me know that I didn’t stand a chance. Somewhere in the background I heard people yelling my name, telling me to move. But I froze. Did nothing. Thankfully one of those grown men saved me and I lived to tell the tale.

But even after all of that, I loved ranch life. I knew I would one day write a story about it. I saved it in my heart for a long time, this is book number forty-seven for me, but it finally came to fruition. A series about seven brothers (even though I grew up with four sisters) in the most beautiful land in Northern Idaho.

For Him and My Family, September 8

Because I said so — and other adventures in Parenting, September 12

For the Love of Literature, September 14 (Author Interview) 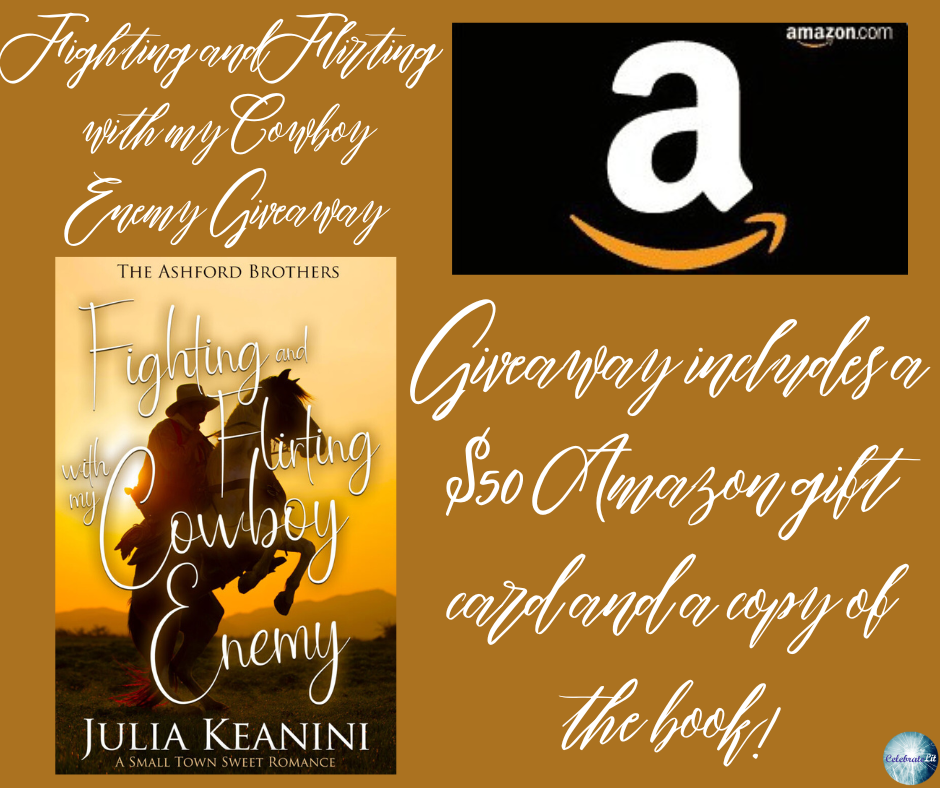 To celebrate her tour, Julia is giving away the grand prize package of a $50 Amazon gift card and copy of the book!!

Posted by Inklings and Notions at 6:46 PM