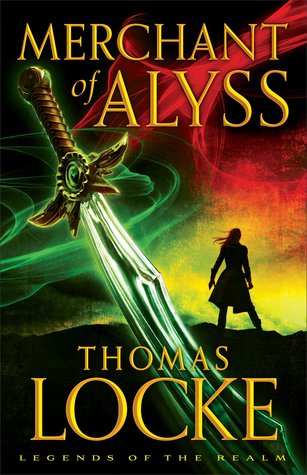 Life for Hyam is bittersweet. Admired by the citizens of Falmouth for his heroic rescue mission, he cherishes these peaceful days with Joelle by his side. Yet grief over the loss of his magical skills during the great Battle of Emporis threatens to engulf him. Sometimes he even wishes he had never known magic at all.

When Hyam comes into possession of an ancient Milantian scroll, he is thrilled to feel the surge of power that courses through him whenever he touches it. But what he discerns in the text could mean war. He embarks upon another journey to determine its true meaning and forestall any attack. But as Hyam is seeking answers, he is unaware that the merchant of Alyss is seeking him . . .

My thoughts: I actually wasn't sure what to expect with this book, since the first one was good, but sometimes the sequels fall flat. That was not the case! I like that the story moves along at a nice, steady pace, and that they bring back some of the characters from the first book. I thought the characters were well written and I like the pace of the story. It is a wonderful addition to one's fantasy shelf!
I received this book from Revell in exchange for my honest review.
Posted by Inklings and Notions at 6:16 AM