The Promise of Palm Grove 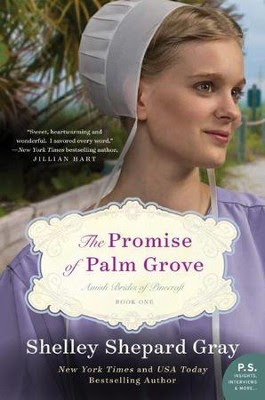 A young Amish woman finds herself torn between the man she's pledged to wed and the man her heart desires in this heartwarming story of chance, duty, and choice in the face of love—the first volume in beloved New York Times bestselling author Shelley Shepard Gray's new Amish Brides of Pinecraft series

Amish bride-to-be Leona is thrilled to be in Florida, on a mini vacation in the pretty town of Pinecraft. Her girlfriends think she's happy because she's away from the stress of wedding planning. They have no idea that Leona's real joy is in being away from her fiancé.

Edmund is a good man and will make a decent husband . . . just not for Leona. The more time she spends with him and his overbearing ways, the less she wants to be his wife. Her cousins are sure Edmund is the right man for her—and their certainty makes Leona begin to doubt herself. But when a chance encounter with a wayward cat brings her face-to-face with a handsome, fun-loving Amish man named Zachary Kaufmann, Leona's faced with two vastly different futures.

Leona must decide: Should she follow the path set out before her? Or take a chance with only the promise of what could be to guide her?

My thoughts: This is a sweet story that has more going on then first meets the eye. Leona is a lovely character who wins readers over from the get go! Life for her has been pretty predictable up to this point. But, now she is having second thoughts about the man she agreed to marry. Will a chance encounter with a young man in Florida be just the thing to encourage her to break things off with Edmund?
I like that Shelley Shepard Gray often tells a story from several different view points. She writes well and does a fabulous job of pulling readers in right off the bat. I enjoyed getting to know the people of Palm Grove, and look forward to the next book in the series (though, it looks like it will deal with some tougher topics).
I received this book from litfuse.com in exchange for my honest review.
Posted by Inklings and Notions at 6:59 PM