When the powerful angelic escort, Jophiel, falls to earth and becomes a cherished son, Joppha, but then goes missing, a cosmic battle ensues over the young lad’s mortality. Kingdom Authoritarians conspire to outsmart the Rebel’s vengeful plan to destroy little Joppha and sabotage his eternity. While in small town Havensight, law enforcement clash with Joppha’s family as they scramble to find someone to blame.

Many wills are at play. But all Joppha wants is to go home.

A standalone read, Jophiel’s Secret is part of A Lifeline Fantasy Series by Johanna Frank, where an adopted line of descendants must survive perpetual rebel attacks on their character. The series begins with The Gatekeeper’s Descendants where this new world is introduced and carries on into Jophiel’s Secret with Pipiera, Matthew, Megalos and Kasartha among others coming with.

If you like stories that take place in a world beyond with everlasting connections, you will definitely enjoy Jophiel’s Secret!

My thoughts: I enjoyed returning to this series and reading about Jophiel, as he goes to earth, and the role that Pipiera plays with coming from heaven to watch out for him. I thought that the story had some interesting concepts, some that I don't totally agree with, but I thought that the overall story was a unique, fantasy style one. The author does an excellent job of drawing readers out and writing a delightful story.

Author of The Gatekeeper’s Descendants and Jophiel’s Secret, Johanna writes fiction fantasy with deeper meanings—creating adventures in the world beyond, where everlasting connections exist alongside good old-fashioned battles of good versus evil.

She and hubby enjoy a life filled with the satisfaction coming from hard work and the love and grace captured from treasured family. The fresh greens and sky blues of Ontario summer months, the just out-of-the-oven aromas at European piazzas, and the tender grips of a grandchild’s hug are at the tip-top of Johanna’s most-loved list.

Her commitment to her readers—stories that are soulful, whimsical, and venturous. Because Johanna feels that even a little bit of heavenly imagination can loosen the chains of life.

I invite you into a world beyond our understanding—one, I hazard to guess, we inevitably wonder about at least once in our lifetime. What exactly do those who have gone before us face after living out their days on earth? What could their watching over us really look like? Did they actually go through a gate? And ah, which one, we might joke.

I dare not suggest I can answer such questions. But take some theological renderings, a good dose of the whole heaven’s gate scene, bits of philosophical ideology about evil, and add in some lovable supernatural characters—the good versus nasty kind, and then? Well, suddenly there’s plenty of havoc to play out on the lives of unsuspecting earthlings, like us, simply trying to get through life as it comes.

A Lifeline Fantasy Series begins with The Gatekeeper’s Descendants where this new world is introduced and carries on into Jophiel’s Secret with all the main characters coming with, though, I must admit, they’ve matured somewhat between the two novels.

Jophiel’s Secret is written such that it can be read as a stand-alone novel. If you like page turning fantasy, celestial imagination, and a few good tugs at your heartstrings, I encourage you to check it out! And I’d love to hear your views.

Because I said so — and other adventures in Parenting, October 10

For Him and My Family, October 17 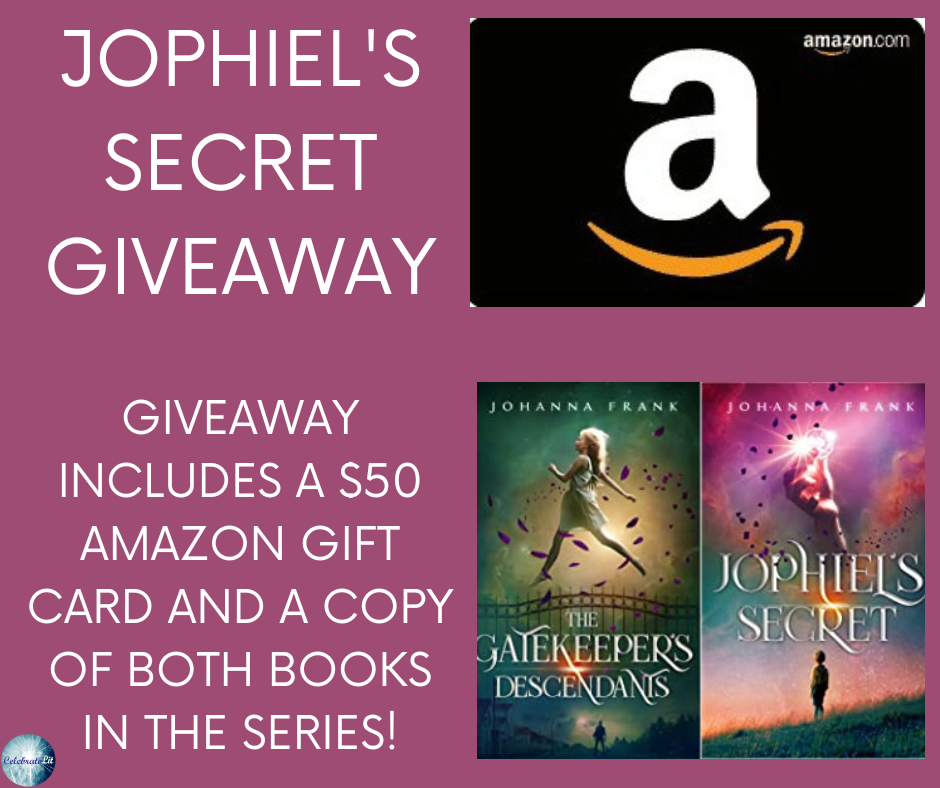 To celebrate her tour, Johanna is giving away the grand prize package of a$50 Amazon Gift and a copy of The Gatekeeper’s Descendants and Jophiel’s Secret!!