Time After Tyme is a fun and thought-provoking mystery about secret codes, university intrigue, and two young girls who fancy themselves 21st-century Nancy Drews.

When strange, coded messages turn up in the chapel prayer box at Bellevue University, the minister suspects a recent campus death may have been murder, so he enlists the help of amateur sleuths Kathryn Frasier and Cece Goldman to decipher the codes and solve the mystery. But when a couple of young girls get wind of it, they decide to find the killer on their own. Almost everyone on campus has something to hide, and the story fluctuates between the rational search for the truth by the adults, and the occasionally misguided, but surprisingly perceptive, insight of the children.

Set on the campus of a modern university, Time After Tyme is both a joyful romp through a cozy mystery and a serious look at the search for truth. The book reminds us of the seasons of our lives, from the irrepressible curiosity of youth to the treasured experience of maturity.

My thoughts: I loved Nancy Drew when I was a kid, so I was thrilled to see a mystery that resembled my favorite series from years past. I thought that the author did a wonderful job with the characters, Kathyrn and Cece are delightful, as are Reen and Joanie. I loved how Reen wanted to be a reporter, and how she applied her dream to the case. I loved the twists and turns to the mystery! This is part of a series, but works as a stand alone. I highly recommend picking this one up!

Kay DiBianca is an award-winning author who loves to create literary puzzles in the mystery genre for her readers to solve. Her characters come to life as they struggle to solve murders and create relationships amidst the ongoing themes of faith and family. Her first novel, The Watch on the Fencepost, won an Illumination Award for General Fiction and an Eric Hoffer Award for Mystery. The second book in the Watch series, Dead Man’s Watch, was a Silver Falchion Award finalist.

Kay is a member of the American Christian Fiction Writers, Sisters in Crime, and the Collierville Christian Writers Group. An avid runner, she can often be found at a nearby track, on the treadmill, or at a large park near her home. Her background in software development fuels her fascination with puzzles and mysteries, and her dedication to running helps supply the endurance and energy she needs to write about them.

Kay and her husband, Frank, live, run, and write in Memphis, Tennessee. You can connect with Kay through her website at https://kaydibianca.com.

When ten-year-old Reen Penterson overhears the words “foul play” in a conversation not meant for her, she jumps to the conclusion that a murder has been committed and says, “Foul play? Murder! My heart pounded and my future life unfolded in front of me like a YouTube video. I could solve the mystery and expose the killer! I’d be famous. I’d be rich. I’d be one of those people who gets a college degree without having to go to school.”

To aid in her “investigation,” Reen enlists the help of her nine-year-old cousin, Joanie Finelson. And the chaos begins.

Writing Time After Tyme was great fun for me. This is the third book in the Watch series of cozy mysteries, and I wanted to add another dimension to the stories. Since I intended to dedicate the book to my best friend from childhood, my cousin Joan, I thought the misadventures of two young girls would be the perfect addition. Although Reen and Joanie are secondary characters in the book, they steal the show from the adults with their misguided attempts to find a killer.

Set on the campus of fictional Bellevue University, the story revolves around the recent death of the university librarian, Mr. Tyme. When strange, coded messages are found in the university chapel prayer box, main characters Kathryn Frasier and Cece Goldman are asked to decipher them. While Kathryn and Cece work to solve the mystery behind the codes, Reen and Joanie are turning things upside down in the search for a killer.

There were several things I particularly enjoyed about writing this book. I loved creating the coded messages, each of which relates to a Biblical proverb. I also liked exploring the secrets many of the adults in the book harbored to avoid being associated with Mr. Tyme’s death.

But more than anything else, I enjoyed the all-out approach to solving the mystery by the two young girls. At times, their unfiltered approach to their quest made me laugh out loud and reminded me of the wonder of that special time of life.

For Him and My Family, April 25

She Lives To Read, April 28

Because I said so — and other adventures in Parenting, May 1

Truth and Grace Homeschool Academy, May 2

Pause for Tales, May 2 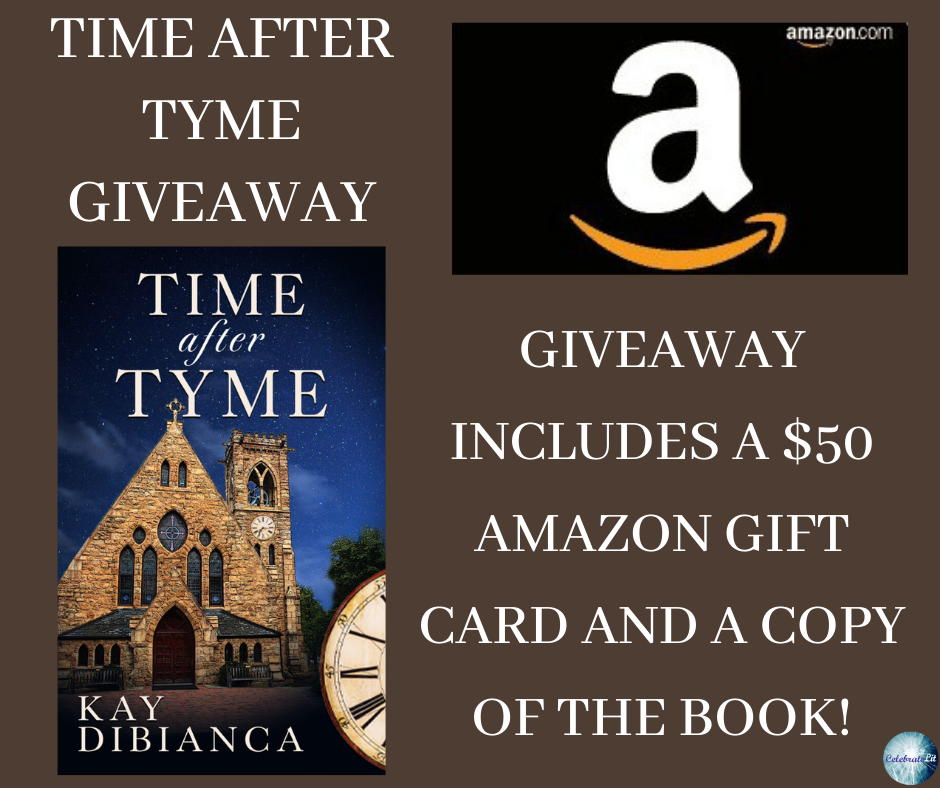 To celebrate her tour, Kay is giving away the grand prize of a $50 Amazon gift card and a copy of the book!!

Posted by Inklings and Notions at 8:57 PM