Flower of the Rockies

Helena MT, 1892-95 ~ Can you leave your past behind?Flower of the Rockies, the 4th book in the Queen of the Rockies series set in picturesque Helena MT at the end of the Gilded Age. No one knows the real Emmalee Warren, or the sacrifices she’s made for love. An infamous soiled dove of no consequence turned miner’s widow. Men are coming out of the woodwork to stake their claim on her and the mine she inherited. They wanted her body before. Now they want her money, and they’ll do anything to take it. But love and acceptance seem out of the question for Emmalee.

Society wants nothing to do with her regardless of her changed ways. Who can she turn to when her inheritance and chance at a future is at risk? Will she be forced back into the brothel to survive? Hiring a lawyer, Richard Lewis, to save her from financial ruin might let her start over somewhere else — if he can save a little of her finances from her husband’s partner. She’ll go anyplace else where no one knows Miss Ellie’s name. Anywhere to leave the scorn behind. Becoming an unknown is the only way to freedom…or is it? Can she leave her past and build a new future?

My thoughts: I love how each of the books in this series have been about a different part of Montana's history. In Flower of the Rockies we meet Emmalee Warren, who has tried to distance herself from her past and make a way for herself. I liked how she winds up getting roped into the vote on a state flower and the parallels that she draws between herself and that search. This is a wonderful series, filled with history and enjoyable characters. I highly recommend picking it up!

Angela Breidenbach is a professional genealogist, media personality, conference speaker, bestselling author of eighteen books, and screenwriter. Angela lives in Montana with her hubby and Muse, a trained fe-lion, who shakes hands, rolls over, and jumps through a hoop. Surprisingly, Angela can also. Catch her show and podcast, Genealogy Publishing Coach!

Flower of the Rockies is one of my favorite stories. I didn’t realize when I started writing about the Montana state flower that I’d be digging into a deeper part of myself. A part I didn’t want to remember.

Stumbling on the women’s club that worked so hard to create symbolism for the state of Montana sparked a story idea. Then that idea needed a character help me tell the story. Then she told me she didn’t know how to read. Okay, I can run with that… But I’m a really good reader. So how do I connect to this widow who needs to learn to read to stop her husband’s partner from cooking her books and stealing everything she has left?

It hit me. She and I had a lot in common. As a kid, I was awkward. I didn’t connect well because I couldn’t read people. Ironically, I read books to learn about people. But it took getting out and being with people to begin really connecting and communicating.

Emmalee doesn’t want to be around people because she’s been rejected for her past and ridiculed publicly. Who wants to be friends with a soiled dove? But, she’s lonely. I suddenly connected on an even deeper level with her. I understood her need for love and acceptance. Her desire to become someone respectable.

On a bigger scale, that’s what the women of Montana were trying to prove, too. That their state fit in with the other states, had something special, something symbolic that showed she was accepted and respected. She had a flag, a state flower, and people who mattered.

Come join me in the Flower of the Rockies. I think you’ll like Emmalee and her journey toward acceptance. There are a lot of layers to the story’s symbolism. I wrote it and have been amazed at how God keeps revealing those layers to me in one short book. Let me know what is revealed to you.

Spoken from the Heart, April 19

For Him and My Family, April 26

Truth and Grace Homeschool Academy, May 1 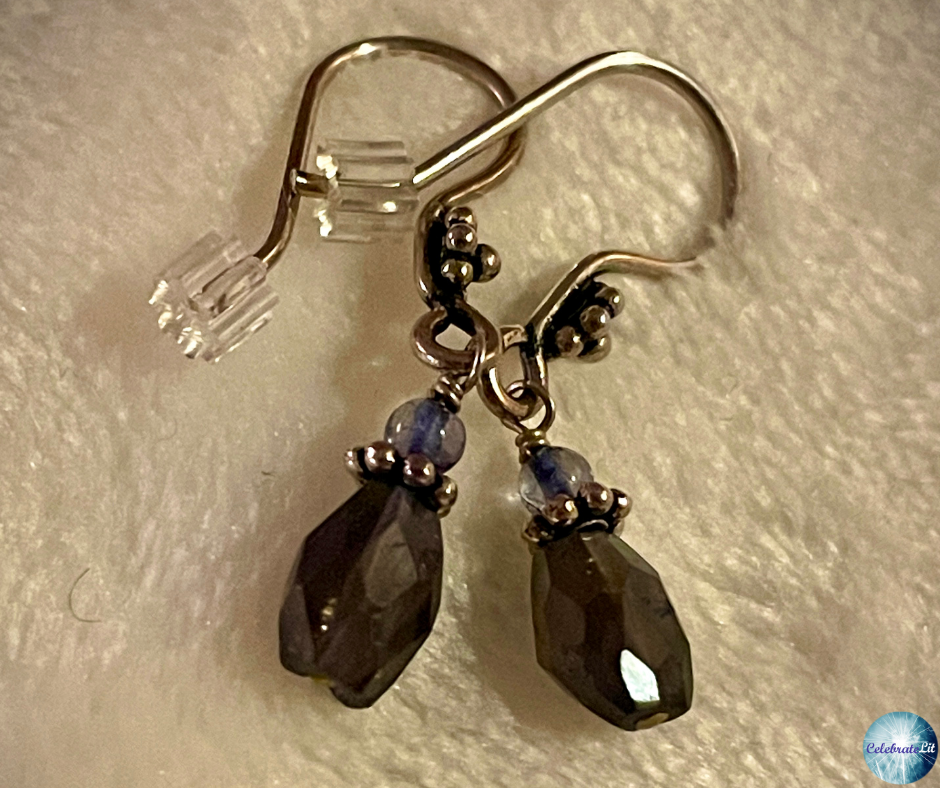 To celebrate her tour, Angela is giving away the grand prize of a pair of iolite and sterling silver earrings!!