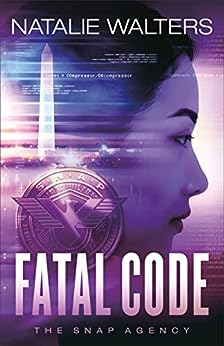 In 1964, a group of scientists called the Los Alamos Five came close to finishing a nuclear energy project for the United States government when they were abruptly disbanded. Now the granddaughter of one of those five scientists, aerospace engineer Elinor Mitchell, discovers that she has highly sensitive information on the project in her possession--and a target on her back.
SNAP agent and former Navy cryptologist Kekoa Young is tasked with monitoring Elinor. This is both convenient since she's his neighbor in Washington, DC, and decidedly inconvenient because . . . well, he kind of likes her.As Elinor follows the clues her grandfather left behind to a top-secret nuclear project, Kekoa has no choice but to step in. When Elinor learns he has been spying on her, she's crushed. But with danger closing in on all sides, she'll have to trust him to ensure her discoveries stay out of enemy hands.Natalie Walters sucks you into the global race for space domination in this perfectly paced second installment of her SNAP Agency romantic suspense series.

My thoughts: I have read and enjoyed each of Natalie Walters mysteries, so I can say with certainty that this one is her best yet! Kekoa is introduced in the first Snap Agency book as a side character, so I couldn't wait to read his story. I enjoyed getting to know him as a character as he struggled to help his neighbor out of a sticky situation and face his past. I've not had a lot of Hawaiian food (though, a local chain with Hawaiian offerings opened within the last couple of years and I enjoy their dishes!), but this story definitely had me wanting to try some new dishes! The mystery and suspense were well done. And, I loved Elinor and her nerdy t-shirts! I would highly recommend reading this story in order, though it can be enjoyed as a stand alone. The first book does set the stage and it's fun to read Jack and Brynn's story.