The Enemy Between Us 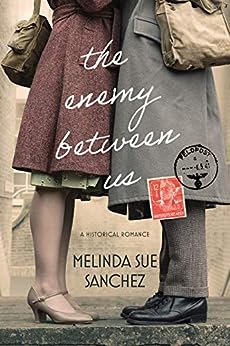 As war tears her country apart, Franca Chessari’s sole focus is on supporting her family amid Nazi occupation. But when her parents, both high-ranking partisans, go missing, Franca is compelled to take action—even if it means crossing enemy lines to save those she loves.

Peter Weimer is a German soldier forced into a war he abhors. When he can take no more of the Nazi atrocities he’s been forced to witness, he deserts the German army—a decision that brands him as an enemy.

Franca and Peter were nothing more than two strangers from enemy countries, but when their paths collide amid the horrors of war, they are swept into an epic journey of chilling danger, unparalleled courage, and a sweeping passion that could cost them everything they have fought for.

My thoughts: While you don't have to read the author's first book in order to enjoy this story, it does help to understand some of the characters a bit more. Especially since this story starts off shortly after the first one left off.

Overall, I enjoyed this book and exploring the possibility of a young woman falling in love with an enemy soldier. I loved the relationships that this book explores. Not only the sweet, romantic one, but also that of families bonding together during a time of war.

I felt like some of the violence could of been toned down a bit while still getting the point across. Yes, I know it is set during wartime, but I have a vivid imagination and can fill in the blanks. That said, this book is still an excellent one to pick up and enjoy!

I received this book from Covenant Communications. This is my honest review.