Tackling the Fields review and giveaway 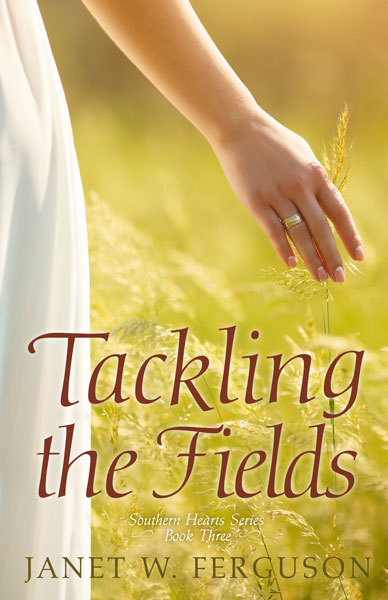 Cole Sanders is a changed man. The university quarterback questions his direction in life after serving on a mission trip in Honduras. Things that used to fill Cole’s ego seem empty after witnessing the developing country’s extreme poverty and the death of a precious child. The one glimmer of hope through his confusion is the fresh perspective he now has about his tutor, Audrey. She possesses something beautiful inside and out—something that might help him become the person he wants to be.

University senior Audrey Vaughn tutored Cole Sanders for an entire year and never imagined the popular quarterback would see her as anything more than a friend. After partnering with him on the mission trip, they are drawn together. And he appears to have changed for the better. To let Cole into her life, Audrey will have to overcome not only her brother’s distrust, but also the paralyzing fear still lingering from a past she’s tried to leave behind.

Cole can’t walk away from Audrey now that they’re back in Oxford. He’ll have to figure out how to keep her giant of a brother, a lineman on his football team, from killing him when the coach has his back turned. But can Audrey trust her heart to a player so similar to the one who stole so much from her in the past?


Janet W. Ferguson grew up in Mississippi and received a degree in Banking and Finance from the University of Mississippi. She has served her church as a children’s minister and a youth volunteer. An avid reader, she worked as a librarian at a large public high school. Janet and her husband have two grown children, one really smart dog, and a few cats that allow them to share the space.

Hi, I’m Janet W. Ferguson, and I’m so excited to be back again and meet more readers through Celebrate Lit!

This is a story I didn’t want to write, but felt called to tackle. The loss of the dream, the loss of innocence, and life’s other unfair struggles can challenge our faith—can make us captive to fear and disappointment.

In the South, we love football. In writing this book, I’m not trying to make a statement for or against the sport. My husband and son loved playing the game. After my son suffered a torn ACL, torn shoulder labrum, and four surgeries, he could no longer participate in the game he loved. He mourned the loss of the brotherhood of his team. I saw the popular pastime differently from his eyes. For young men, I believe it is a bond between friends for a common goal. Though the character in this book is totally fictional, I’m dedicating this book to my son, Luke.

The other sensitive topics in this story seemed particularly sad, but relevant in our society. Trust me, I didn’t prefer to research acquaintance/date rape or human trafficking, but both are going on all too often in communities both small and large. There are a number of organizations set up to help victims of these crimes if you feel a calling to help.

Someone reading this may have had something terrible that happened in their past or may know someone who has. God is able to set free the captives, set you free from the bonds that hold you. My prayer is that you find comfort in that truth.

To celebrate her tour, Janet is giving away a $75 Amazon gift card Click here to enter:
My thoughts: While I enjoyed the previous books in the series, this one was my favorite! The characters are incredible and their struggles real. I love that Cole has come home from a mission trip ready to change and looking at his life differently. This book deals with difficult subjects, like human trafficking and pornography, showing how those two tie together. Janet handles these sensitive subjects marvelously though! I think this is a great YA story, since it shows the impact of some of our decisions that we think only affect us.
I received this book from Celebrate Lit in exchange for my honest review.
If you would like to buy a copy,go here

Posted by Inklings and Notions at 8:08 AM