In the clay-rich hills of the newly founded state of West Virginia, two families tentatively come together to rebuild a war-torn brickmaking business.
Ewan McKay has immigrated to West Virginia with his aunt and uncle, promising to trade his skills in the clay business for financial help. Uncle Hugh purchases a brickmaking operation from a Civil War widow and her daughter, and it's Ewan's job to get the company up and running again.
Ewan seeks help from Laura, the former owner's daughter, and he quickly feels a connection with her, but she's being courted by another man--a lawyer with far more social clout and money than Ewan. Resolving that he'll make the brickworks enough of a success that he can become a partner in the business and be able to afford to bring his sisters over from Ireland, Ewan pours all his energy into the new job.
But when Hugh signs a bad business deal, all Ewan's hard work is put in jeopardy. As his hopes for the future crumble, Laura reveals something surprising. Can she help him save the brickworks, and will Ewan finally get a shot at winning her heart? 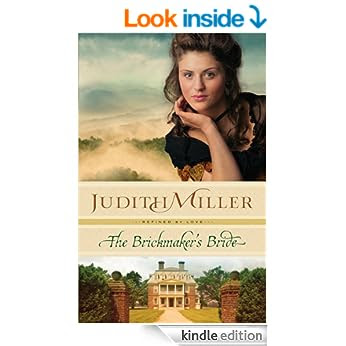 My thoughts: I enjoy Judith Miller's books, since she does a wonderful job at bringing her characters to life and filling her novels with historical details. This book wound up being no exception! The story moved along at just the right speed. I enjoyed getting to know Ewan and Laura as they worked their hardest to get her father's brick making business back up and running. It was interesting to read about a way that some women back then could be involved in a family business, and how that probably wound up being somewhat of a necessity in the time period that this book falls into (post Civil War), when there was a shortage of young men.
I also thought it was interesting how Ms. Miller portrayed Ewan and his family and the struggles they faced with immigrating from Ireland, especially the prejudices against the Irish.
Two thumbs up!
I received a copy of this book from litfuse in exchange for my honest review.
Posted by Inklings and Notions at 7:22 PM