A Trail so Lonesome 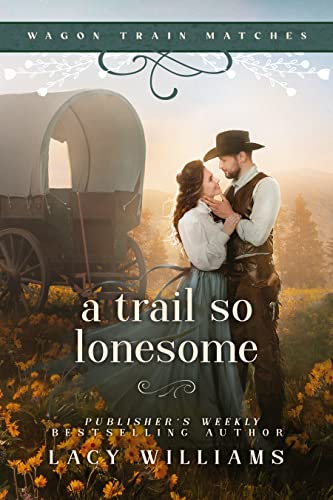 Spending five months eating trail dust wasn’t Leo Spencer’s first choice. Or his second. He’s not one to run away, but some situations can’t be fixed and his family—two brothers and a sister—needs to start over. Which is how he finds himself on a westbound wagon train.Evangeline has a secret, one that has sent her on a journey across the plains on the Oregon Trail. When her father is badly hurt and she needs help, Leo is there. A deal is struck and the two unlikely friends form an alliance… that leads to more.But Evangeline’s secret looms over her… and Leo’s family troubles are far from over.

A Trail So Lonesome Excerpt 1

“I want to pay you to take my family to Oregon.”

A few minutes ago, he'd been rousted from a deep sleep to Coop’s whispered, "Evangeline needs you,” and he still wasn’t fully awake, his brain sluggish and slow.

He still felt the shape of her burned into his memory. Had it been instinct or something he didn’t want to admit even to himself that had prompted him to reach for her in his half-awake state?

"Start at the beginning," he said.

He heard her inhale. "You said yourself that Father won't be able to drive the wagon. I can learn how to do it, but there is so much else. Taking care of Sara and now Father. Feeding the oxen. Driving the team. Cooking supper. I can't do everything on my own."

“Why not ask Owen? He seems sweet on you. He wouldn't even need to be paid. Or someone else.” His gut twisted when he said it.

He felt some motion in the darkness, as if she had waved her hand. He could perfectly imagine the dismissive gesture.