Lost in the Darkness 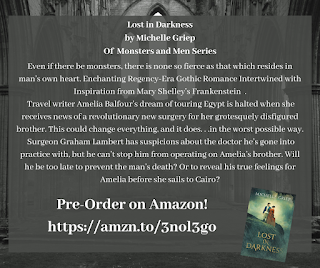 Even if there be monsters, there is none so fierce as that which resides in man’s own heart.Enchanting Regency-Era Gothic Romance Intertwined with Inspiration from Mary Shelley's Frankenstein   Travel writer Amelia Balfour’s dream of touring Egypt is halted when she receives news of a revolutionary new surgery for her grotesquely disfigured brother. This could change everything, and it does. . .in the worst possible way. Surgeon Graham Lambert has suspicions about the doctor he’s gone into practice with, but he can’t stop him from operating on Amelia’s brother. Will he be too late to prevent the man’s death? Or to reveal his true feelings for Amelia before she sails to Cairo?
Lost in Darkness by Michelle Griep is releasing on November 1! Be sure to preorder yours now for a special preorder price!
Click here for more information . This post contains affiliate links.
Posted by Inklings and Notions at 9:08 PM