Oath of the Brotherhood

When evil threatens, who will find the faith to fight it?

In an island kingdom where the Old Ways hold fast and a man’s worth lies entirely in his skill with the sword, Conor Mac Nir is a musician and a follower of a forbidden faith–problematic for any man, but disastrous for the son of the king.

When Conor is sent away to a neighboring kingdom to secure a treaty, he learns that his ability with the harp is a talent that traces back to the magical foundations of a once-united Seare. But his newfound home is soon placed in peril, entangling Conor in a plot that has been unfolding since long before his birth.

Only by leaving both kingdoms behind and committing himself to an ancient warrior brotherhood can Conor discover the part he’s meant to play in Seare’s future. But is he willing to sacrifice everything–including the woman he loves–to follow the path his God has laid before him?

My thoughts: I adore all things Irish, so I was interested to see how this story played out with a magical setting that was inspired by Ireland. Overall, I enjoyed the coming of age story and the unlikely hero that Conor is. I thought that the blend of Ireland, music, and magic was a fun combination. I love that this story is an allegory and gets the reader to think, like all good allegories. I look forward to reading the next book in this series! 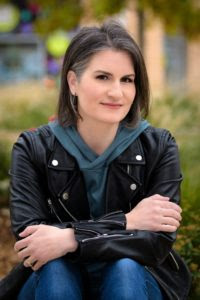 Carla Laureano is the two-time RITA® award-winning author of over a dozen books, spanning the genres of contemporary romance and Celtic fantasy. A graduate of Pepperdine University, she worked in sales and marketing for more than a decade before leaving corporate life behind to write full-time. She currently lives in Denver, Colorado with her husband, two sons, and an opinionated tortoiseshell cat named Willow.

How A Romance Author Came to Write Fantasy Fiction

It’s a question I get a lot from readers, assuming the reader even knows that I write in more than one genre: how did a romance author come to write fantasy?

The answer, of course, is simple: I didn’t. I was actually a fantasy writer long before I ever tried my hand at romance, so the question should really be reversed.

As a young writer, I dabbled in lots of different genres: middle grade, young adult, romantic suspense, historical romance—whatever genre had captured my imagination at the time. I loved historical romance the most, but I quickly found that I didn’t have the patience for the way that historical facts interfered with my intricately designed plot.

Then, in college, I rediscovered fantasy fiction, namely historical fantasy like that of Guy Gavriel Kay. I was enchanted, both as a reader who wanted to be swept away by tales of heroism and struggle, and as a writer who had finally found the solution to my frustrations: all the fun of a historical time period without the pesky need to adhere to reality!

My first attempt at a fantasy novel was sweeping and unwieldy. This was in the early 2000s, where to be taken seriously as a fantasy writer, you had to write long… like, seriously long. A kind and very well- known literary agent summed it up best in reply to my query: “Sounds interesting, but I just don’t have the energy for another 300,000-word work of epic fantasy at this time.” (I cringe to think about writing a book that long now.) Reading tastes were changing and shorter fiction was coming back into fashion, so I shelved that project for years. Instead, when it came time to write a new series, I pulled my favorite elements from that first attempt, set them in a world based on a historical time period (Dark Ages Ireland), and began writing the book that would become Oath of the Brotherhood.

So, how does someone go from being a dyed-in-the-wool fantasy writer to being known for contemporary romance? In one of my more dramatic moments, when it felt like the revisions to this epic story would not come together (read: I had to cut 20,000 words from it to make it saleable and had no idea how to do that) I declared that I was no longer a fantasy writer and decided to pen something quick and fun… a contemporary romance. While the fantasy novel was out on submission, I pitched the romance at a conference… and within a couple of months, received offers for both. Suddenly I wasn’t just one or the other; I was both a fantasy and a romance author simultaneously.

The genres aren’t as far apart as they may seem, though, and not just because there’s a romantic thread woven into Oath of the Brotherhood. At its core, all Christian fiction is a love story: one between God and humanity. In all of my books, regardless of genre, the characters’ foremost journey is toward an understanding of who they are in Christ. Every story is a tale of the love that God has for his creation: that He cares for us so much that he won’t let us be swept away by a storm of darkness, whether that be physical or symbolic, but provides way toward hope and salvation.

When it comes to fantasy, that rescue and salvation might just be a touch more literal.

For Him and My Family, January 30

Because I said so — and other adventures in Parenting, February 4

Through the Fire Blogs, February 6

Adventures of a Travelers Wife, February 10

Labor Not in Vain, February 11

To celebrate her tour, Carla is giving away the grand prize package of a signed hardcover copy of Oath of the Brotherhood and a beautiful leather-bound Celtic knot journal!!