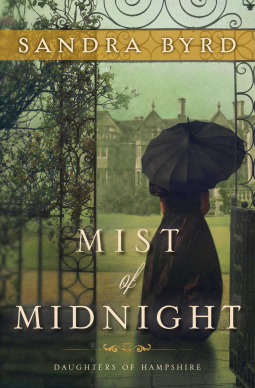 In the first of a brand-new series set in Victorian England, a young woman returns home from India after the death of her family to discover her identity and inheritance are challenged by the man who holds her future in his hands.

Rebecca Ravenshaw, daughter of missionaries, spent most of her life in India. Following the death of her family in the Indian Mutiny, Rebecca returns to claim her family estate in Hampshire, England. Upon her return, people are surprised to see her...and highly suspicious. Less than a year earlier, an imposter had arrived with an Indian servant and assumed not only Rebecca's name, but her home and incomes.

That pretender died within months of her arrival; the servant fled to London as the young woman was hastily buried at midnight. The locals believe that perhaps she, Rebecca, is the real imposter. Her home and her father's investments reverted to a distant relative, the darkly charming Captain Luke Whitfield, who quickly took over. Against her best intentions, Rebecca begins to fall in love with Luke, but she is forced to question his motives—does he love her or does he just want Headbourne House? If Luke is simply after the property, as everyone suspects, will she suffer a similar fate as the first “Rebecca”?

A captivating Gothic love story set against a backdrop of intrigue and danger, Mist of Midnight will leave you breathless.

My thoughts: I loved this story! It is a hard one to put down, with all it's twists and turns. I thought it was interesting to "journey" with Rebecca, as she not only tries to unravel the mystery of the other Rebecca who sought to steal her inheritance, but as she tried to fit into to English society after living in India most of her life. The characters come to life on the pages, and I loved how the story played out! This is quite the Gothic style novel.:) I found myself unable to decide if I liked or hated the hero.;) Two thumbs up!
I received a copy of this book from Netgalley in exchange for my honest review.
Posted by Inklings and Notions at 9:08 AM