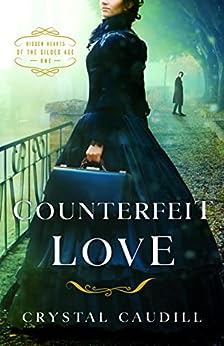 Can this undercover agent save the woman he loves--or is her heart as counterfeit as the money he's been sent to track down?After all that Grandfather has sacrificed to raise her, Theresa Plane owes it to him to save the family name--and that means clearing their debt with creditors before she marries Edward Greystone. But when one of the creditors' threats leads her to stumble across a midnight meeting, she discovers that the money he owes isn't all Grandfather was hiding. And the secrets he kept have now trapped Theresa in a life-threatening fight for her home--and the truth.After months of undercover work, Secret Service operative Broderick Cosgrove is finally about to uncover the identity of the leader of a notorious counterfeiting ring. That moment of triumph turns to horror, however, when he finds undeniable proof that his former fiancée is connected. Can he really believe the woman he loved is a willing participant? Protecting Theresa and proving her innocence may destroy his career--but that's better than failing her twice in one lifetime.They must form a partnership, tentative though it is. But there's no question they're both still keeping secrets--and that lack of trust, along with the dangerous criminals out for their blood, threatens their hearts, their faith, and their very survival.Combining rich history, danger, suspense, and romance, Crystal Caudill's debut novel launches this new historical series with a bang. Fans of Elizabeth Camden, Michelle Griep, and Joanna Davidson Politano will be thrilled to find another author to follow!

My thoughts: Theresa Plane has suffered loss in her young life, first with the deaths of her parents and then when her fiancé, Broderick, left and failed to give a good reason why. Tired of waiting for him when it feels like he is lost to her has lead her to accept the proposal of a man who promises a steady future. When her grandfather's creditors catch her in their web, she realizes just how far their fortune has fallen. I enjoyed this historical read, though it was a little slow getting started. I feel like it would of been nice to have a prelude of what Theresa and Broderick's courtship was like before it all fell apart, since things were referenced that made it feel like there should of been a previous novella. Overall though, I enjoyed the unique story and the cast of characters. I look forward to reading the next book!

I received this book from the author through I Read with Audra. This is my honest review.

a Rafflecopter giveaway
Posted by Inklings and Notions at 7:45 PM