The Trouble with Jenny 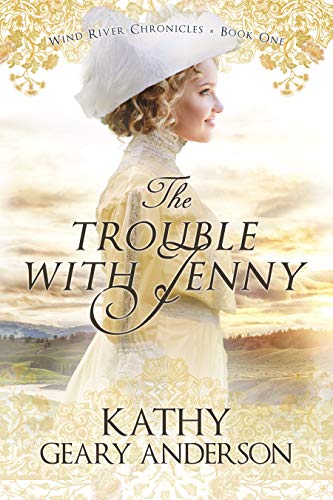 At the turn of the 20th century, New York socialite Jenny Westraven is in trouble . . . again. An orphaned heiress from a large banking family, she’s expected to follow the rules of society and marry according to her wealth and status. But Jenny craves adventure and anything BUT the ordinary. So, when her guardian aunt and uncle return from a European vacation to find Jenny working as a typewriter girl in a Newark law office, they are appalled. Worse yet, they interrupt a kiss between her and her young boss Mr. “Ben” Bennett.

Jenny has been getting Ben in trouble since he was ten, so he’s secretly relieved when her guardians reject him as a suitor. He has other plans for his life, and they don’t include his troublesome childhood friend. When Jenny uses outrageous methods to reject the suitors her family does approve for her, her aunt and uncle decide to send her to her brother in Wyoming.

Then, a family tragedy takes Ben out west as well, and his path crosses with Jenny’s once again. As they work together to end an injustice, what was merely an attraction between them develops into something more. Unfortunately, Jenny’s involvement with another man comes between them and puts her in the worst trouble of her life.

Now Ben must decide whether to risk his heart to rescue her once again or cut his losses and let her go.

My thoughts: Ben has know Jenny all of his life, long enough to know that trouble follows her! When he agrees to give her a job at his law office, he doesn't realize what he is getting into and that his perfect plans are about to go awry!

Overall, I enjoyed this story and the refreshing characters and unique plot. I didn't care for the mild language in it, like when Ben is conversing with his step-brother. Otherwise though, I liked the characters and enjoyed the trip back in time to different parts of the United States. I look forward to reading more books in this series!

Posted by Inklings and Notions at 8:32 PM