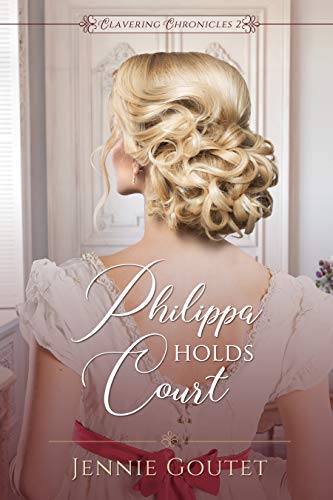 She’s capable of many things—including driving him mad.

At the start of their London Season, Philippa Clavering discovers her friend, Susan, is being pursued by the wrong gentleman and decides to turn Susan’s head to a worthier suitor. Not one to shrink from what she views as her duty and gift, Philippa sets plans in motion to bring about the happy ending her friend deserves. What she does not expect is to have Susan’s older brother watching—and criticizing—her every move.

After a respectable number of years on the town, Jack Blythefield is at last contemplating the idea of settling down. What he seeks is a compliant wife to provide him an heir or two and make his home comfortable while he spends his evenings at the club, where a man can get some peace. What he does not need is a termagant who sets his life on end with madcap schemes, which invariably involve his unwilling assistance.

However, when the reputation of Jack’s family is threatened, Philippa is the one he turns to. And as her most determined suitor grows assured of his conquest, Jack must decide if a comfortable and docile wife is truly what he seeks, or if he should throw down the gauntlet of his heart before Philippa closes court.

Philippa Holds Court is the second in the Clavering Chronicles series, after A Fall from Grace, and it is a clean & wholesome Regency romance, written in the traditional style. ♥

My thoughts: I enjoyed this story whole heartedly! I didn't know just how much fun of a character Philippa would be when I picked this book up. An unconventional young woman, she is much to interested in helping those around her find the right matches, as well as keeping true to her own ideas to think about settling down and making a match. Especially since her sister seems set to marry her off to someone who will advance her brother in law's career. When Jack Blythefield enters the picture, neither is what the other is looking for. Jack was a little hard to take at first, but he grew on me as he developed as a character.

I loved how unique this story is, since it has more about the politics of the time than any other Regency style story I have read, and it carries off being interesting and informative without bogging the story down. I found the introduction to English Parliament and the Repelling of the Corn Laws to be fascinating. This is an excellent story to pick up and enjoy!

I received this book from the author. This is my honest review and is in no way influenced by receiving a complimentary copy.