Insights on the Book of Daniel

For more than four decades, Alan Stringfellow’s Bible studies have brought greater insight into God’s Word to thousands of believers. Now, the author of Through the Bible in One Year and Great Characters of the Bible leads readers on a 12-lesson, verse-by-verse study of the book of Daniel. Stringfellow’s in-depth teaching will bring clarity and understanding to one of the most misunderstood books in Scripture. With this study, readers will learn…

By embarking on this journey, believers will discover the influence that Daniel had on the life and literature of the Jewish people throughout the biblical period and all the way to the writers of the New Testament, including Jesus Christ Himself, who often quoted from it. But nowhere is that influence seen as thoroughly as in the writings of the apostle John and parallels that exist with the book of Revelation. As in John’s prophetic work, the book of Daniel describes in beautiful and marvelous language the glorious coming of our Lord, Jesus Christ. Like John, Daniel was sure and certain about the final triumph of the kingdom of God.

My thoughts: It's hard to write a review about a study done on the book of Daniel, since I think that different theologians have different ideas on what some of the prophesies mean. I found this one to be interesting and full of good insight, but there were also things that I didn't agree with. I don't agree that there will be a pre-tribulation rapture, and I think that it can be a dangerous belief in that it could damage one's faith to believe it and for it to not happen. I did find that this book caused me want to dig deeper into Daniel and Revelations, as well as the history behind Daniel's interpretation of the statue. 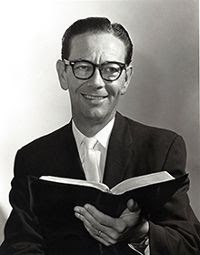 Dr. Alan B. Stringfellow (1922-1993), a Bible teacher and minister of the gospel for more than four decades, specialized in Christian education. Long concerned with the struggle most people have in understanding the Bible, he set out to write a study course that would bring believers more knowledge and a greater appreciation of God’s Word. He wrote Through the Bible in One Year, Great Truths of the Bible, and Great Characters in the Bible for laymen, to be taught by laymen. His latest studies include Insights on the Book of Revelation and Insights on the Book of Isaiah. Dr. Stringfellow trained at Southwestern Baptist Theological Seminary in Fort Worth, Texas, after which he served at Travis Avenue Baptist Church in Fort Worth; First Baptist Church of West Palm Beach, Florida; First Baptist Church of Fresno, California; and First Baptist Church of Van Nuys, California.

For the Love of Literature, December 6

For Him and My Family, December 9

Because I said so — and other adventures in Parenting, December 15

Posted by Inklings and Notions at 8:25 PM