Ruby Moon embodies a tale of grief, guilt, and redemption…

On the shores of Lake Superior in Ontario during the mid 1890’s, Jenay, a young woman of mixed French and Ojibwe descent, must survive the trauma of causing a horrific accident.

Amidst this drama, Jenay is caught in a web spun by Renault, a rich, charming man who once threatened ruination of her father’s shipping company but now seeks something even more valuable…

Jenay must find where her strength lies in order to face the challenges life brings her or be washed away like driftwood on the tumultuous shores of Lake Superior. Life’s richest dramas are played out under the banner of two ruby colored moons and become the hidden gems which forge her into a mature strong woman. Jenay realizes God is by her side, using even the harsh events of life to create something precious in her.

My thoughts: This is a wonderful book that brings to life an interesting part of history. I enjoyed getting to know Janay as she works out what is missing in her memories about what happened leading up to her holding a bloody knife.  Janey struggles to figure out how she fits into the two worlds she is born into, which I found to be a unique story in and of itself.

Overall, I enjoyed this book and thought that the pace was well done. I look forward to reading the other books in this series! 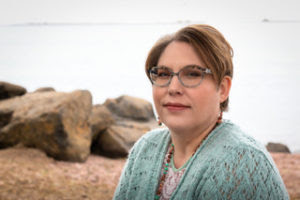 Jenny lives in Wisconsin with her husband, Ken and their pet Yorkie, Ruby. She is also a mom and loves being a grandma. She enjoys many creative pursuits but finds writing the most fulfilling.

Jenny’s education background stems from psychology, music, and cultural missions. She spent many years as a librarian in a local public library but recently switched to using her skills as a floral designer in a retail flower shop. She is now retired from work due to disability.

She authored and performed a self-published musical CD entitled, Scrapbook of a Closet Poet.

Jenny’s favorite place to relax is by the western shore of Lake Superior, where her novel series, By The Light of the Moon, is set. She has self-published the first two books, Ruby Moon and Blue Moon in her four-part series. Two more novels to complete the series are planned for 2020. She is currently writing a new historical fiction series called, Sheltering Trees.

Keep current with Jenny by visiting her website at https://jennyknipfer.com.

The Creation of Ruby

All things have a beginning, a middle, and an end. Let me share a glimpse of Ruby Moon’s creation with you.

Ruby Moon, the first book in my series: By the Light of the Moon, began many years ago—twenty in fact— with a hot, sticky July evening, a red moon, and a premise: what it would be like to recover from the guilt of being involved in an accidental death. Someone I knew had dealt with that same issue not long before.

Yes, I really did see a red moon on that July evening and while doing a mundane task of taking the garbage out. The image of the otherworldly blood-red sphere hanging above the treetops stuck with me, and before I got into bed that night, I wrote the opening scene to what would become Ruby Moon.

Insert life, kids, and a job into the picture. These took up the great portion of what I call my “author in the making” years. For a while I scribbled out Jenay’s story, but my life and family in general took precedence. Her story waited in the depths of our old IBM computer for just the right time.

Jenay is my main character and the crux of the novel revolves around how she handles the horrific accident, which takes someone’s life. Her help comes from several avenues. One being her ability to express her thoughts by journaling, which becomes an important part of Ruby Moon. I split the timeline, in which Jenay relays her own thoughts in a present tense and a third-person multiple perspective picks up the rest until the timelines converge on the fateful night.

When I first started Jenay’s story in Ruby Moon, I didn’t know what it was to grief or how the harsh places of life can gouge you out until hardly anything remains but hope or despair. Eventually, that’s where I found myself.

During that time, I expressed myself through writing songs, poems, and endless diary entries. I’d also started several blogs, back when blogging first started to be the cool thing to do. However, it wasn’t until a serious health crisis arrived on the scene that Ruby Moon emerged from her hiding place.

The Ending or Fruition:

In 2015 I was diagnosed with multiple sclerosis. My life since has been a series of ups and downs, but through it all I’ve tried to keep my eyes focused on God and the bigger picture. I drew from my past trials, knowing that He wouldn’t allow anything to come to me that wouldn’t bring Him glory and help me to grow.

On the day I had to quit my job as a floral designer because of my disability, I thought of Ruby Moon (I didn’t know the title then) and picked up where I left off at chapter 5. Over several months the rest of the book poured out of me, like water expressed from a sponge, as if I’d held Jenay’s story within me the whole time.

After months of revisions and with a hope and a prayer, I started down the publishing path. In hindsight I wish I’d been more patient and tried the querying path for a longer time before striking out on the indie road, but such is life. We can only move forward not back.

Here I am, with you. Thank you for reading about my writing journey. I hope that you’ll be able to pick up one or all of my books. If you read and like them, please tell a friend or family member about them.

It’s my mission to not only entertain my readers with a well-written story but to leave them encouraged and inspired afterward, which I hope you will be.

Please visit my website at jennyknipfer.com to learn more about me, my books, and how you can connect with me.

For Him and My Family, October 26

To celebrate her tour, Jenny is giving away the grand prize of a $25 Amazon gift card!!

Posted by Inklings and Notions at 8:18 PM