The Girl Who Could See 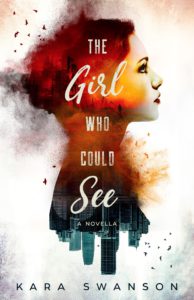 Book title: The Girl Who could See

All her life Fern has been told she is blind to reality—but, what if she is the only one who can truly see?

Fern Johnson is crazy. At least, that’s what the doctors have claimed since her childhood. Now nineteen, and one step away from a psych ward, Fern struggles to survive in bustling Los Angeles. Desperate to appear normal, she represses the young man flickering at the edge of her awareness—a blond warrior only she can see.

Tristan was Fern’s childhood imaginary hero, saving her from monsters under her bed and outside her walls. As she grew up and his secret world continued to bleed into hers, however, it only caused catastrophe. But, when the city is rocked by the unexplainable, Fern is forced to consider the possibility that this young man is not a hallucination after al—and that the creature who decimated his world may be coming for hers.

My thoughts: First off, the cover is just gorgeous! That alone had me wanting to pick up the book as soon as possible, since the silhouette framing the city is just beautiful. Thankfully, the story lives up to the gorgeous art! It's a wonderful story of impossible love, other worlds, and suspense. This is one for the beach bag! I look forward to reading more by this talented young author.
I received this book from Celebrate Lit in exchange for my honest review. 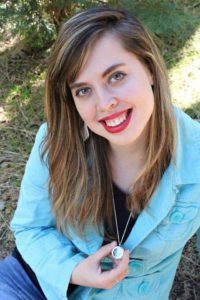 As the daughter of missionaries, KARA SWANSON spent sixteen years of her young life in the jungles of Papua New Guinea. Able to relate with characters dropped suddenly into a unique new world, she quickly fell in love with the speculative genre and was soon penning stories herself. At seventeen, she independently published her debut fantasy novel, Pearl of Merlydia. Her short story is included in Kathy Ide’s 21 Days of Joy: Stories that Celebrate Mom. She has published many articles, including one in the Encounter magazine, and she received the Mount Hermon Most Promising Teen Writer award in 2015.

Did you have an imaginary friend growing up? I did. And I think most of us probably understood what it was like to use our childhood imaginations to create friends and take us places.

The Girl Who Could See follows Fern Johnson, a young woman who’s imaginary friend, Tristan, first appeared in her life when she was eight years old—and has never left. Now nineteen, Fern still sees Tristan, only he is no longer her friend. Now he is her curse. The source of her insanity. The reason Fern cannot keep a job and has been passed from one psychologist to another. The reason she is one step away from a psych ward. However, Tristan disagrees. He says that he’s not a figment of Fern’s imagination and is determined to prove it. But, if his existence is real, it has dangerous implications not only for Fern, but for her world. Because the creature that decimated Tristan’s planet is coming for Earth—and only the girl everyone says is crazy can stop it.

I wrote the novella as a way to explore the idea of what would happen if someone had an imaginary friend who never left. What would the psychological and daily implications be? And what if that imaginary friend wasn’t imaginary? The story that grew from those sparks of ideas became an adventure that I hope you’ll enjoy as much as I did. 🙂

To celebrate her tour, Kara is giving away a $25 Amazon Gift Card!! Click below to enter. Be sure to comment on this post before you enter to claim 9 extra entries!