In times of war, is anything as it seems?

Her aunt’s invitation to Richmond is just the change Beatrice Swanson needs after her brother’s release from a Union prison. Bea’s father agrees to the trip with a condition—one that tosses her emotions into swirling confusion.

Though Jay Nickson wants to serve his country as a Confederate soldier, his work is too important to the government. Bea’s interest in his job, which includes secrets that would benefit the Union, arouses his suspicions. Is she spying for the North? His growing feelings for her are hard to squelch.

Though she participates in activities to benefit Confederate soldiers, Bea struggles with her own loyalties and her father’s demands. Where does her cousin, Meg, go on her solitary errands? Bea’s own growing love for Jay, a Southerner, only adds to her confusion. Tensions escalate in Richmond as the Union army approaches, drawing her into more secrecy. Where does her allegiance lie? And how will she be forced to prove it?

Nothing in war is simple…especially when the heart becomes entangled.

My thoughts: I enjoy a good Civil War era story, since it was such a fascinating and tumultuous time in history, with not only the nation being torn in two, but a lot of families feeling the division. I thought that the author did a wonderful job of writing about the war from the perspective of Bea and Jay, as they try to figure out if their attraction can survive the differences in opinions they have over the war. It would of been hard to trust someone back then, with not knowing who could be a spy. This story is an excellent glimpse of a difficult time in America's history. I look forward to reading the next book in the series! 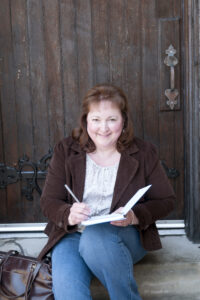 Sandra Merville Hart, award-winning and Amazon bestselling author of inspirational historical romances, loves to discover little-known yet fascinating facts from American history to include in her stories. Her desire is to transport her readers back in time. She is also a blogger, speaker, and conference teacher. Connect with Sandra on her blog, https://sandramervillehart.wordpress.com/.

In my book, the hero is a Virginian who supports the South. Though Jay hates slavery, he cannot turn against his state. His job at Tredegar Ironworks supplies the Confederate army with artillery. They develop new weapons and technology, such as submarines, that must be kept secret even from Richmond residents.

Our heroine is from the North. Bea has Southern ties and her brother, a Confederate officer, was recently released from a prison camp. Bea’s understanding of both sides of the conflict tosses her into confusion, especially in light of her growing feelings for Jay.

Part of my research for this novel involved a trip to Richmond museums. One display in particular at the American Civil War Museum at Historic Tredegar made me want to do a little dance. (If you followed me around on my museum visits, you’d witness my enthusiasm for historical people and events and how they impact my stories. Perhaps you share my love of history. 😊)

Anyway, this particular display was a painting of Julia Ann Mitchell, who lived in Richmond at the start of the Civil War. She was from a well-to-do family that traveled often. On one of these trips, she met and fell in love with Frederick Coggill, a New York City resident. Though they loved one another, the couple was divided in their loyalties.

Sadly, Julia’s brother, who fought for the Confederacy, was killed in battle. This probably added to the conflict between Julia and Frederick.

I’m happy to say that the couple seemed to enjoy a happy ending, for they were married in 1863.

I didn’t yet know my characters when I read this display, for the stories ferment in my imagination as research reveals the history. I tucked it away in my mind and it later inspired me.

Boulevard of Confusion isn’t Julia’s and Frederick’s love story. Not at all. It’s simply that history’s record of them overcoming their differing loyalties to marry proves that it happened. That’s all I needed to know.

Avenue of Betrayal, Book 1, is set in the Union capital of Washington City (Washington DC) in 1861, where a surprising number of Confederate sympathizers and spies lived. Boulevard of Confusion is set in Richmond, the Confederate capital in 1862. Actual historical spies touch the lives of our fictional family.

Through both real and fictional characters, this series highlights activities spies were involved in and some of the motives behind their decisions.

I invite you to read both Avenue of Betrayal and Boulevard of Confusion. And please watch for Book 3, Byway to Danger, which will soon follow!

Inklings and notions, May 12

Locks, Hooks and Books, May 16

Truth and Grace Homeschool Academy, May 19

Happily Managing a Household of Boys, May 20

Of Blades and Thorns, May 23

To celebrate her tour, Sandra is giving away the grand prize of a $50 Amazon gift card!!

Posted by Inklings and Notions at 7:56 PM