Rose in the Desert

Anna Babic Robbins, dubbed “The Rose Of The Adriatic” by pilgrims to her village, leaves her home bound for America. She is to deliver secrets concerning the fate of the world to a Chicago priest who will shepherd mankind to prepare to hear God speak.

Four women travel to Las Vegas, and while there, snow begins to fall during triple digit heat. They soon learn that the non-accumulating snowfall is a worldwide phenomenon—a universal sign from God preceding the gift of a permanent sign inexplicable by earthly standards.

With the culmination of these miraculous events, all their paths intersect, and God will reveal His plans to each soul on earth.

My thoughts: This book was interesting, to say the least! I was a little lost at the beginning with some of the plot that didn't seem to fit in with the rest of the story. I did think that the author did an excellent job of building up to to message of the story and making the reader stop and think about one's own spiritual journey. This book has a wonderful message and is an excellent book to pick up! 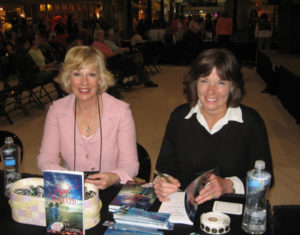 K.M. Daughters is the penname for team writers and sisters, Pat Casiello and Kathie Clare. The penname is dedicated to the memory of their parents, “K”ay and “M”ickey Lynch. K.M. Daughters is the author of 15 award winning romance genre, women’s fiction and Christian fiction novels. The “Daughters” are wives, mothers and grandmothers residing in the Chicago suburbs and on the Outer Banks, North Carolina. Visitors are most welcome at http://www.kmdaughters.com

In our first book in the Gospa series, Jewel of the Adriatic, on April 7th, 1992, rose petals rained on three teenagers walking past a craggy hill in their village, Valselo, near the Adriatic coast. The deluge stopped, and high on this hill, they saw a remarkably beautiful young woman with a child in her arms. They immediately thought that she was Jesus’ mother. She didn’t say anything to them but gestured for them to come closer. They were scared and ran. These three children were Anna, Elizabeta and Josip, who despite their fear, returned to the hill and were rewarded with another visitation by the mother of God, lovingly referred to as Our Lady of the Roses. Daily apparitions continued for decades as the visionaries became adults, guided by the heavenly visitor to pray, open their hearts fully to the salvation of Christ and carry her messages to the world in discipleship. Josip became a priest, instructed to pray for vocations. Elizabeta became a wife and mother, dedicated to praying for unbelievers. And Anna, also a wife and mother, was given the role of divulging secrets concerning all of mankind to an ordained priest, three days before the predicted events occur. In Rose of the Desert, we meet the “Belles of St. Mary’s”, lifelong girlfriends who have shared everything with each other since they met in grammar school. Or have they? When experiencing the all-knowing, forgiveness of God’s presence, will they change so they never have anything to hide again? The Belles’ lives intersect with Anna Babic’s when Anna travels to the United States to fulfill her heavenly appointed mission. Now the time has come.

Because I said so — and other adventures in Parenting, August 27

To celebrate their tour, K.M. Daughters is giving away the grand prize of a beautiful necklace!! (Pictured Above)

Posted by Inklings and Notions at 9:04 PM