Whispers from the Shadows 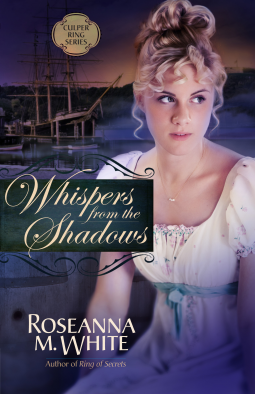 The second book in the Culper Spy Ring series finds Winter and her family again involved in collecting information during a time of war in America. Great Britain has again declared war on the colonies in 1812, seeking to bring the young country under their thumb.
When young Gwyneth Fairchild witnesses her father murdered by someone she trusts, she takes flight to America, in hopes that the Lanes will protect her from the turmoil surrounding. Left with no one else to trust, she must rely on complete strangers to help her recover from the shock of a world turned upside down.
While I didn't connect with the characters from this novel as I did with those in Ring of Secrets, I still found Whispers from the Shadows to be a great continuation of the story. I look forward to the third book!
Posted by Inklings and Notions at 2:22 PM