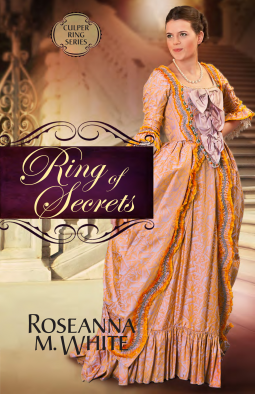 There is more to Winter Reeves than meets the eye. Forced to project herself as a silly aristocrat by her demanding grandparents, she find that the front is the perfect way for her to gather information for the Patriot's in the Loyalist dominated city of New York during the Revolutionary War. When Bennet Lane meets her, he realizes there is more to Winter than just a pretty face, and seeks to go about discovering the heart behind the mask. But, Bennet is on his own mission in New York City: one to uncover the infamous Culper spy ring.
Filled with dazzling details, interesting characters, and a riveting plot, Ring of Secrets is bound to delight readers for years to come! And the good news about it? This is the first in a series by Roseanna White, so there is at least two more books in the series, set during other American wars.
I rather enjoyed this novel, since there was more to the story. I found the characters well written and loved the Quaker roots. The spiritual message was deeper than a lot of fiction go, so I appreciated that as well. I enjoyed this one so much, that I have already started the next one.;)
Posted by Inklings and Notions at 3:31 PM