From a USA Today bestselling author comes a gripping story of mystery, romance, and pulse-pounding suspense.

How can she save the little girl next door from being exploited if nobody believes her?

Grace used to try to save people, but that was before she realized how powerless she is. Now, she avoids emotional ties, working from her secluded cabin, content with her aloneness. When eight-year-old Lily starts hanging around, Grace enjoys her company but carefully keeps her distance—until she discovers the girl is being exploited. Little though she wants to, she must get involved, even if it means risking her own safety to secure Lily’s.

Andrew can’t help but be drawn to his new neighbor and her beautiful foster child. When he learns about Lily’s disturbing history, he offers to help Grace prove her suspicions about the girl’s father. But the more they learn, the more puzzling Lily’s history seems. They work together to unravel the mystery, determined to ensure Lily ends up with a family who loves her.

But Lily’s father isn’t giving up his muse—or his obsession—that easily. He believes Lily is rightfully his, and he’ll do anything to get her back.

Don’t miss this thrilling page-turner, the latest in the addictive Coventry Saga.

My thoughts: This story was hard to put down! When Grace realizes the danger that Lily is in, she swoops in to rescue her and escape from the evil man chasing her. I enjoyed getting to know Grace and Andrew as they get to know one another. I thought that the author did a wonderful job with the character development and keeping the suspense going. The ending pushed me a bit out of my comfort zone with just how creepy the villain was, but otherwise I enjoyed this story! 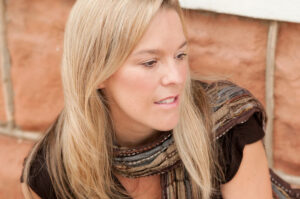 Robin Patchen is a USA Today bestselling and award-winning author of Christian romantic suspense. She grew up in a small town in New Hampshire, the setting of her Nutfield Saga books, and then headed to Boston to earn a journalism degree. After college, working in marketing and public relations, she discovered how much she loathed the nine-to-five ball and chain. After relocating to the Southwest, she started writing her first novel while she homeschooled her three children. The novel was dreadful, but her passion for storytelling didn’t wane. Thankfully, as her children grew, so did her writing ability. Now that her kids are adults, she has more time to play with the lives of fictional heroes and heroines, wreaking havoc and working magic to give her characters happy endings. When she’s not writing, she’s editing or reading, proving that most of her life revolves around the twenty-six letters of the alphabet. Visit https://robinpatchen.com/subscribe to receive a free book and stay informed about Robin’s latest projects.

I know detectives and FBI agents and other law enforcement officers are fighting crime and solving mysteries all the time, but I love stories where regular folks—the kind who live next door and work in supermarkets or sell insurance—suddenly find themselves in the middle of a mystery—one only they can solve.

Touch of Innocence has that everyman… er, woman character, a reclusive former child therapist who wants nothing more than to be left alone. The problem is, Grace has a gift (which she calls a curse) that enables her to “see” that her eight-year-old neighbor, Lily, is being exploited by her child-pornographer father. But since Grace doesn’t have any proof, only the impressions she received when she touched the child’s palm, the police don’t do anything to rescue little Lily.

So Grace takes matters into her own hands.

As the villain so aptly puts it, she “blows up her entire life for the sake of a girl she barely knows.”

And that all happens in the first chapter. Then it gets really interesting.

There’s so much talk in the world about doing things for the greater good, for the benefit of the many, not the few, but that wasn’t Jesus’s way, was it?

Jesus didn’t die for the collective good. He died for you and me. He left the ninety-nine to seek out the one.

In a way, Touch of Innocence asks if one forgotten little girl is worth the cost of the heroine’s security, maybe even her life?

What is the value of one life, and how much are we as believers willing to sacrifice to save?

I think it’s a question worth exploring.

A little FYI about the book: I was very careful not to have any explicit scenes. Though the reader gets the sense of what Lily’s been through, there are no descriptions or images you’ll wish you hadn’t seen. I did my very best in this story to highlight a terrible thing that’s happening all over the world while at the same time honoring my readers and, above all, the Lord.

For Him and My Family, March 27

Spoken from the Heart, March 29

Because I said so — and other adventures in Parenting, April 2

To celebrate her tour, Robin is giving away the grand prize package of Convenient Lies, book 1 in the Nutfield Saga, and Glimmer in the Darkness, book 1 in the Coventry Saga, along with a coffee mug!!