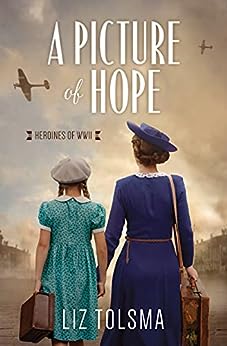 A Picture of Hope Excerpt Three

Ever since he was a small child, he’d played in this thicket, inventing games about pirates and robbers and the American cowboys he’d seen in the cinema.

Never in his life had he dreamed that in his own backyard he’d have more adventure than he could handle.

They stumbled to the edge of the tree line as the plane zoomed overhead. He gazed up when the cargo bay opened, and the box attached to the chute floated to the ground.

It struck with a thud, the chute drifting over it almost like snow. Jean-Paul and the others hurried forward.

A moment later, light flooded the field from all directions. “Halten sie.”

Jean-Paul’s body went cold. He blinked against the brilliance that burned his eyes. Though he couldn’t make out any shapes, there must be a ring of Germans around them.

And in front of their enemy was all the evidence they needed to shoot Jean-Paul and his compatriots on the spot. No questions asked. His breath caught in his throat, cutting off oxygen to his lungs.

One man dressed in a brown uniform with tall black boots stepped from behind the light and into the center of the ring, clutching a rifle that he trained straight on Jean-Paul’s heart.

A Photojournalist Risks Her Life to Save ChildrenFull of intrigue, adventure, and romance, this new series celebrates the unsung heroes—the heroines of WWII.Journalist Nellie Wilkerson has spent the bulk of the war in London, photographing pilots taking off and landing—and she’s bored. She jumps at the chance to go to France, where the Allied forces recently landed. She enlists Jean-Paul Breslau of the French underground to take her to the frontlines. On the journey, they come upon an orphanage where nuns shelter children with disabilities. Can they help save them before the Nazis come to liquidate it?

Passionate might best describe Liz Tolsma. She loves writing, research, and editing. Her passion shone through in her first novel which was a double award finalist. On any given day, you might find her pulling weeds in her perennial garden, walking her hyperactive dog, or curled up with a good book. Nothing means more to her than her family. She’s married her high-school sweetheart twenty-eight years ago. Get her talking about international adoption, and you might never get her to stop. She and her husband adopted three children, including a son who is a U.S. Marine, and two daughters.