“To enter Faerie’s blessed demesnefour secrets must be found:the land unbound by time and spaceopens only to the one who knowsthe Light, the Song, and Mortal Gate.”

In the sheltered town of Carmel, women do not have a future outside of a good marriage. That future is threatened when Leah Edwards’ father gambles away the family’s livelihood and estate. She and her sisters must hurry to find husbands. Then August Fox, a Guardian from Cariath, comes to town and purchases a supposedly haunted manor. Charged to keep the peace between mortals and Faerie, the Guardians are the stuff of legend. After he stuns her with a marriage proposal, Leah reluctantly journeys to Cariath, discovering there is more to August and the legends than she guessed.

Nimrod and his Oath-breakers betrayed the Guardians, seeking to solve an ancient riddle that would unlock the Faerie realm. Not all his followers share his desire for conquest. Benedict Fox, his second-in-command, has different motives. But as he continues fulfilling Nimrod’s plan, Benedict hurtles towards a choice between saving his family and settling a personal vendetta.

For Leah, August, and their allies, it is a race against time to solve the ancient riddle before the Oath-breakers, and reunite the Guardians to save the mortal realm. The war is never really over, and this time, the battle lines cut through blood ties and brotherhood.

My thoughts: While I like fantasy style stories, I am never quite sure how I will like a new author who has written in that genre. I am happy to say that this one wound up being delightful! The author did a wonderful job of world building and bringing her characters to life. I felt like I was dropped into the story as Leah tries to figure out who August Fox really is. This is an enjoyable book to pick up! I look forward to reading more by the author.

Dana Li is a software product manager by day, and a novelist by night. She holds an MS in management science and engineering from Stanford University and a BS in computer science from USC, but she’s always been better at writing stories than code. Her writing misadventures began with a dozen now-deleted Star Wars fanfiction tales. She loves good fantasy/sci-fi, classy cuisines, and roller coasters (but not all at once). Dana currently lives in the San Francisco Bay Area, and The Vermilion Riddle is her first novel.

Two of my favorite fiction authors are J.R.R. Tolkien and Jane Austen. Besides both being British, their works are worlds apart, literally – one wrote epic, sprawling stories of the battle between good and evil, while the other wrote of small town families, romance, and culture in the Regency era. If Tolkien’s heroes failed, death and darkness would sweep across the land. If Austen’s heroes failed, a lady would be single at thirty. (The horror!)

As different as they are, I had a desire to blend the best of both genres. I didn’t think it’d be the most marketable book, but then, I also thought no one else would write this. That concept sparked the genesis of The Vermilion Riddle. I wanted an epic fantasy that was also character-driven and intimate. I love how Austen deftly explored familial and romantic relationships in the framework of her society, and I was curious to see how that would unfold in the context of a traditional fantasy. I shamelessly drew influence from the Regency era for parts of my story’s culture, simply because it’s got that quaint, cozy vibe, stored inside a broad, sweeping world.

This is a snippet of what I wrote in my original query letter for The Vermilion Riddle:

“While the novel evokes elements of classic fantasy—quests, duels, and the battle of good versus evil—it thrives on character exploration. The plot hums to the beat of a cosmic conflict and climax, though the struggles within a family—between fathers and sons, brothers by blood (and not), husband and wife—forms its core melody.”

When it came to the characters and relationships in the story, three questions framed my writing.

What makes a strong, relatable, and feminine heroine?

What happens to brothers who are pitted against each other ideologically?

What does a love story that happens after marriage look like?

I did not know, concretely, the answer to any of these when I began, and Riddle was going to be my way of exploring them. In retrospect, I was in over my head. I’m not sure if I ever found totally satisfactory answers, but as I worked on the novel over the years, I felt the story mature quietly alongside of me. There were nuggets of wisdom I gleaned from life and other people that made their way into the story. There were also surprising insights that emerged from the characters as I was writing.

In the end, I wanted to write characters who, though born into another world, were achingly human. Though they chase ancient secrets and face the fury of the faerie-kind, they aren’t wrapped in an air of mythology that makes them feel far removed from us. They are the sort of people who could be legends – but a legend is usually formed in retrospect. They are like Merry and Pippin, hobbits who felt like useless baggage for much of their journey before they were hailed as heroes.

That’s what I strove for, at least – a story that’s epic yet intimate, that’s far-flung and yet close to home.

For Him and My Family, September 30 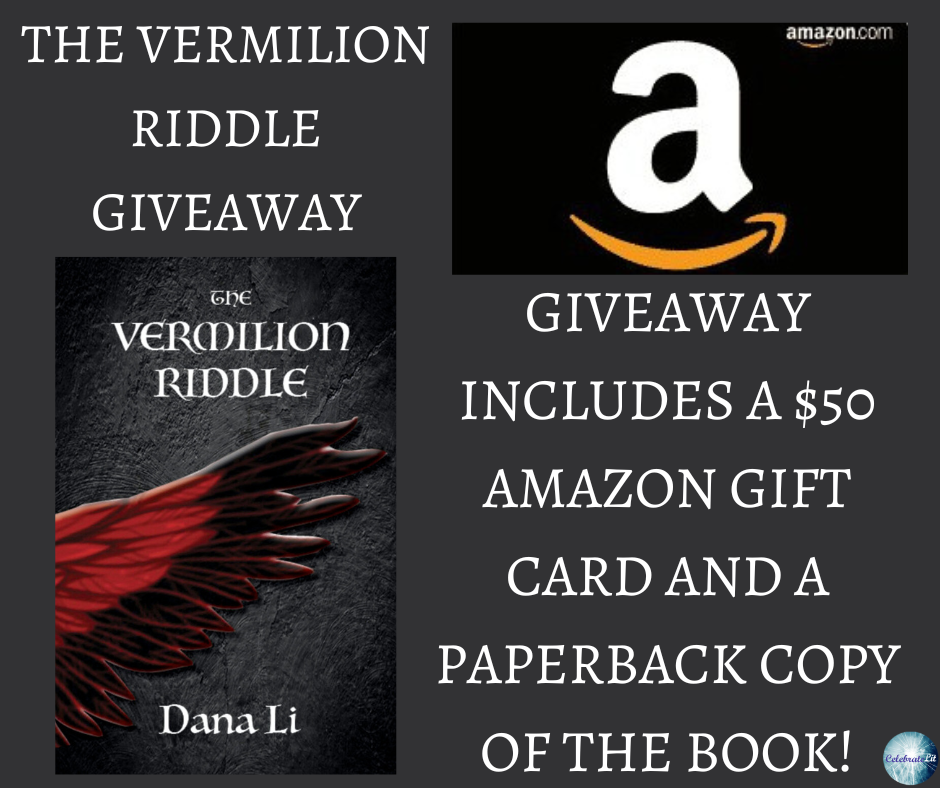 To celebrate her tour, Dana is giving away the grand prize package of a $50 Amazon gift card and a paperback copy of The Vermilion Riddle (e-book for those outside the US)!!

Inklings and Notions at 4:30 PM