Being West is Best 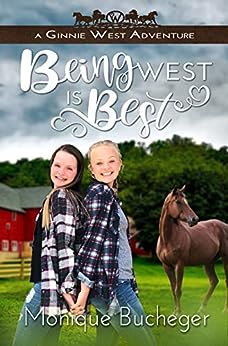 Twelve-year-old BFFs, Ginnie West and Tillie Taylor, are matchmaking geniuses. Together, they maneuvered Ginnie’s widower-dad into proposing to Tillie’s divorcee-mom. Sweet! Certain they are well on their way to sisterhood, each girl is floored when Tillie’s lousy-excuse-for-a-father puts in an appearance after a six year absence. Too bad “lousy dad repellant” doesn’t come in a can. Even though Tillie’s dad has sobered up and is determined to make amends, Tillie would rather he just disappear again. If he stays, “Operation: Secret Sisters” may need to be renamed “Operation: Not Gonna Happen.”If that’s not bad enough, the biggest bully in seventh grade comes over often and wishes he could call the West’s farmhouse “home.” When the bully’s abusive dad shows up as well, Ginnie thinks it’s time to change her family’s motto from “When you’re here, you’re family” to “There’s no more room at the West’s.”

My thoughts: The last book about the West family deals with the aftermath from the cliff hanger that was at the end of the third book. The story deals with some difficult subjects, like abuse and alcoholism and the effects of both. I feel like Monique does a good job of handling the difficult subjects though in an age appropriate way.

I would of liked for this story to have a bit more of the loose ends tied up, but I enjoyed the story over all. This is a great series for older middle school readers to pick up!

I received this book from Just Read. This is my honest review and is in no way influenced by receiving a complimentary copy.

Inklings and Notions at 8:06 PM