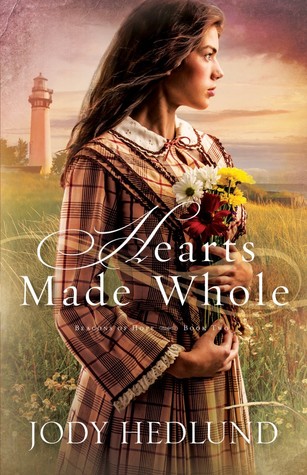 After her father’s death, Caroline Taylor has grown confident running the Windmill Point Lighthouse. But in 1865 Michigan, women aren’t supposed to have such roles, so it’s only a matter of time before the lighthouse inspector appoints a new keeper–even though Caroline has nowhere else to go and no other job available to her.

Ryan Chambers is a Civil War veteran still haunted by the horrors of battle. He’s been given the post as lighthouse keeper, and the isolation where he can drown in drink and hide from his past is appealing. He’s not expecting the current keeper to be a feisty and beautiful woman who’s none-too-pleased to be giving up her position. They both quickly realize he’s in no shape to run the lighthouse, but Ryan’s unwilling to let anyone close, ravaged by memories and guilt. Caroline’s drawn to this wounded soul, but with both of them relying on that single position, can they look past their loss to a future filled with hope…and possibly love?

My thoughts: I really like that Jody puts a lot of research and detail into her stories, bringing to life the period of history she is writing about. I found this story to be an interesting and unique look at the role which light keepers played on some of the Great Lakes. It was also interesting to have one of the main characters be a Civil War veteran, showing how hard it was for him to get back to work after being injured in the war and having to deal with memories of unjust acts committed during the war. And, also for it to show the adjustment of the women who had to work during the war, to cover for the shortage of men to fill jobs. I enjoyed the historical aspect, but I didn't care for one of the characters, who was just not a kind person. Over all though, the story is an interesting one, full of depth. I enjoyed getting to know most of the characters!
I received this book from Litfuse in exchange for my honest review.
Inklings and Notions at 8:06 PM